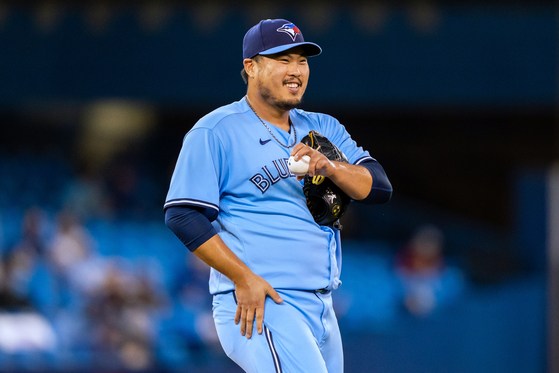 Toronto Blue Jays starting pitcher Ryu Hyun-jin smiles during a game against the Cleveland Indians at the Rogers Centre in Toronto on Tuesday. [USA TODAY/YONHAP]


In December 2019, Ryu Hyun-jin stood in front of the cameras at the Rogers Centre in Toronto wearing a Blue Jays jersey for the first time. Nearly 20 months later, Ryu made his first appearance on the mound at the Rogers Centre on Tuesday, picking up his 11th win of the season in a long-awaited homecoming.

Ryu has spent his entire career with the Toronto Blue Jays on the road. Since the outbreak of the Covid-19 pandemic, the club has played home games at smaller stadiums in New York and Florida. That all changed last Friday, when relaxed rules about travel between Canada and the United States allowed the Blue Jays to end their exile and return to Toronto.

For Blue Jays ace Ryu, the move was clearly a good one.

Ryu gave up two earned runs on seven hits in seven innings pitched against the Cleveland Indians on Tuesday, striking out eight for this 11th win of the 2021 season. He didn't allow any walks, calmly setting things up for the Blue Jays offense to get the job done.

Ryu took down the first six batters in order. While he was busy on the mound, the Blue Jays pulled ahead by three runs in the first, adding one more in the fourth, two in the fifth and one in the sixth.

Ryu's two earned runs came in the fourth and sixth innings, the first when the Indians strung together a single and a double and the second off of two doubles. Neither was really a cause for concern, and Ryu returned for a three-up, three-down seventh inning before letting Rafael Dolis take over in the eighth.

Ryu roughed up again in second start of 2022 season