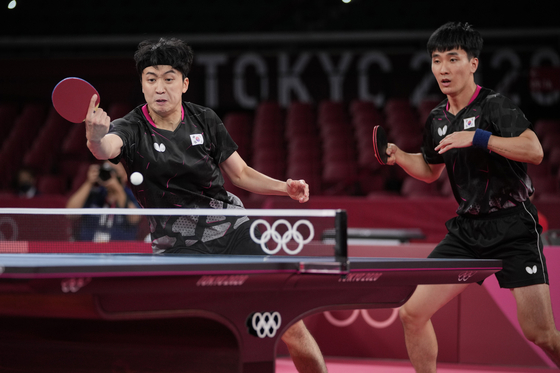 
The Korean men's table tennis team lost its semifinal to China in straight sets on Wednesday, falling foul of a formidable team made up of the world's top three players.

Korea's Jeong Young-sik, Lee Sang-su and Jang Woo-jin were unable to stop the dominant Xu Xin, Ma Long and Fan Zhendong, losing in just over 2 hours at the Tokyo Metropolitan Gymnasium in Tokyo on Tuesday afternoon.

Jeong and Lee, the top-ranked doubles team in the world, could do little to stop Xu and Ma, who don't regularly compete as a pair so are unranked. The first match went in three straight games, with Korea only managing to score 18 points in the 28 minute match.

The second match pitched Jang, the highest ranked Korean at No. 12, against world No. 1 Fan. Jang put up a good fight, scoring at least seven points in every game, but was unable to stop Fan from winning the match 3-0.

The final game saw world No. 22 Lee take on No. 2 Ma. While on paper this might have been the biggest mismatch, Lee put up a serious fight, dragging the match to a full five games and battling for an hour before finally conceding defeat.