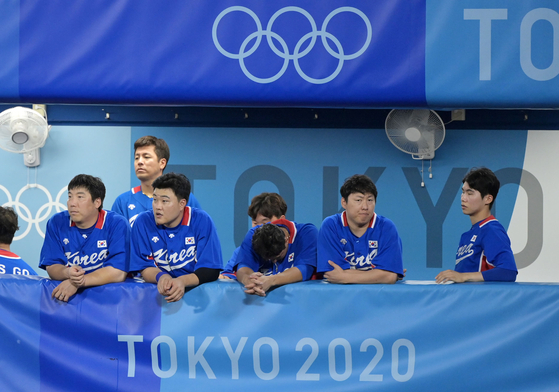 Korean players look on as Japan wins a semifinal game between the two countries in the baseball tournament at the 2020 Tokyo Olympics at Yokohama Stadium in Yokohama on Wednesday. [JOINT PRESS CORPS]


The Korean baseball team lost its semifinal game against Japan on Wednesday night, giving up three runs at the bottom of the eighth inning to allow the host nation to advance to the final with a 5-2 victory.

Korea's bid to defend its title as the reigning champion isn't over yet, however, as the quirks of the unusual six-team tournament mean the loser of the first semifinal immediately earns a spot in the second semifinal. Korea will face the United States in that semifinal on Thursday.

Regardless of the sport, any clash between Korea and Japan is always an important game. In baseball that is doubly true, as it not only pits the two countries against each other, but also the greatest players that the KBO and NPB, two of the best baseball leagues in the world outside of the majors, have to offer.

On Wednesday night it was Japan that emerged victorious, but it was a close game that could have gone either way. Japan struck first, stringing together a few singles and a sacrifice fly to take a 1-0 lead. The home nation added to that in the fifth, with a double and a single combining to bring in a second run.

Korea responded in the sixth, driving in two runs on four singles to tie the game at 2-2, and that's where things stayed for the next few innings.

At the bottom of the eighth, things came unglued. Go Woo-suk took the mound for Korea, starting off his outing looking confident with a strikeout looking. His control started to slip after that, with a single, a wild pitch and two walks combining to load the bases with only one out.

With all the ducks on the pond, the only thing Japan had to do was hit something into the gap to take a practically insurmountable lead. That's exactly what Tetsuto Yamada did, blasting a bases-clearing double to left field to put Japan up 5-2.

With just the top of the ninth left to work with, Korea was unable to overcome the lead and the game ended. Japan head to the final, while Korea get to do it all over again on Thursday.

Korea and the United States have already faced off once in the tournament, during the group stage on July 31. Korea lost, 4-2, its only loss in the tournament before Wednesday's game. Korea have looked more confident in the games since then, with the squad playing better as a team than it did in the first few days.

The loser of Thursday's game will have used up all its second chances, and will next face the Dominican Republic in the bronze medal game.