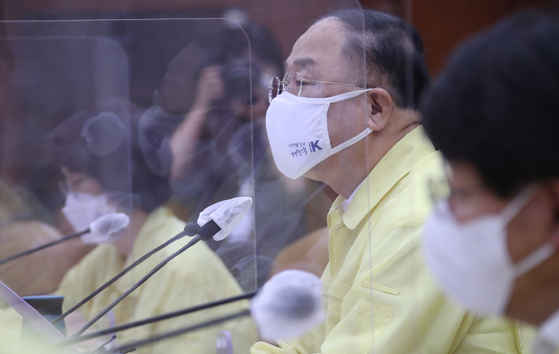 Finance Minister Hong Nam-ki said the government will decide next month whether to extend financial aid to small businesses, including suspensions of loan payments.

“Several economic reports including credit card sales show a relatively steadily flow compared to previous Covid-19 waves,” said Hong on Thursday during a government economic meeting. “[However], it is worrisome that the difficulties that small shop owners and vulnerable people face will grow due to the continuing spread of Covid-19 and the ongoing heightened social distancing measures affecting face-to-face service businesses.”

“The active support of the financial industry for companies that are temporarily facing hardships will act as a positive cycle in which by preventing businesses from going bankrupt, they will be able to repay their debt once the real economy recovers,  reinforcing the soundness of financial companies.” Hong said.

A suspension of payments of principle and interest on loans was to expire at the end of next month.

This is not the first time the program has been extended since its inception in April 2020.

The program was supposed to be temporary and end in September 2020. It was extended until the end of March and then for another six months.

In a meeting on July 20, President Moon Jae-in said financial authorities should consider measures that would help the credit ratings of small shop owners that were late on loan payments.

According to Blue House spokesperson Park Kyung-mee, Moon told his staff, “As there are late payments due to difficulties caused by Covid-19, measures are needed that would help the credit ratings of those that have been paying back their debt sincerely.”

While Moon’s comment confused many, the Blue House later explained that his intention was to order the government to review measures that would help people with low incomes and low credit rating who are struggling.

There are growing concerns over the Bank of Korea tightening its monetary policy -- and making loan payments bigger.

It was also the fourth consecutive months in which consumer prices rose more than 2 percent.

As of the end of March, self-employed business owners are estimated to hold loans amounting to 831.8 trillion won ($727 billion). That’s 18.8 percent more than the same period a year ago.

So far some 204.4 trillion won of loan principle and interest payments have been estimated to have been delayed by the government suspension.

During Thursday’s meeting, Finance Minister Hong raised the possibility of additional support for small businesses owners
such as suspending taxes and payments to the national pension, health and employment insurance systems.