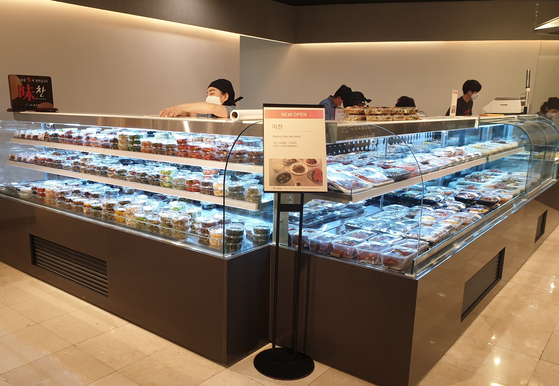 Packs of banchan, or side dishes, are sold at a Lotte Department Store branch in Nowon District, northern Seoul. [LOTTE DEPARTMENT STORE]


Banchan has gone from an occasional purchase and a bit of a luxury to a regular item on the shopping lists of the harried and the hungry.

These little containers of pre-made side dishes — including pickled vegetables, kimchi, spiced tofu and marinated quail eggs — are more expensive than if they were made from scratch at home, so they have sold best in the fancier zip codes of Seoul.

Now they are catching on nationwide. People stuck at home seem to be opting for the packages of ready-made dishes to save themselves from cooking yet another meal.

According to Lotte Department Store, its Gangnam and Jamsil branches, both in southern Seoul, sold 90 million won ($79,000) to 100 million won per month of banchan between April and July. They sold 40 million won monthly during the same period a year ago.

The Pangyo branch in the tech valley of Gyeonggi broke the 100-million-won mark in late 2020.

Selling well in Gangnam District is not much of a surprise, but pre-made side dishes are gaining popularity in other regions as well.

Banchan sales at Lotte Department Store’s Gwanak, Pyeongchon and Konkuk University Star City branch range from 40 to 60 million won per month, increasing some 300 percent on year. The three branches are located near universities and areas considered to have less expensive house prices.

“People buy banchan that require a lot of work to make, such as soups, stews and complicated side dishes that need a lot of ingredients,” said Lee Jee-hee, a buyer at Lotte Department Store. “Considering the cost of ingredients and time needed, purchasing banchan will be an attractive choice for people who have to work.”

“To make dakdoritang, you have to buy a chicken for 7,000 to 8,000 won at a discount mart and costs more to buy other ingredients such as onions and red pepper powders,” said Ju Sang-hee, a 41-year-old living in Gangseo District, western Seoul, in speaking about preparation of spicy chicken stew. “I saw dakdoritang for two selling for 13,000 won at a department store banchan section, and I bought it right away.”

An increasing number of people are expected to buy side dishes in the future.

According to Korea Agro-Fisheries & Food Trade Corporation (aT), the size of Korea’s homemade meal replacement (HMR) market, which includes pre-made banchan, rose 75 percent on year to 3.5 trillion won last year. The organization expects the market to be valued at over 5 trillion won in 2021.

With many preferring to buy side dishes for their dinner table, department stores say selling banchan is an effective way to attract customers.

“There’s an increase in customers who come to buy banchan more than once a week,” said a spokesperson for Lotte Department Store. “We plan on developing more types of banchan and increasing the number of products we carry.”

Hyundai Department Store’s delivery service To Home used to offer a banchan subscription box only for residents in certain areas of Seoul, such as Apgujeong, southern Seoul, but expanded their delivery range in June to cover all of greater Seoul due to demand.

“We deliver five packs of stews and banchan, and it’s highly popular — we have fewer than 10 percent of our customers canceling the banchan subscription,” said a spokesperson for Hyundai Department Store.