Masking up on planes becomes serious

Masking up on planes becomes serious 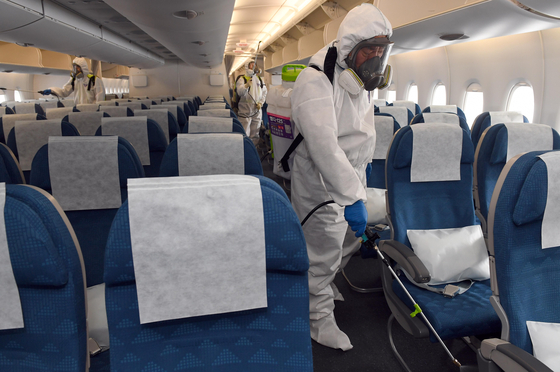 
Domestic airlines are being allowed to get tough with passengers refusing to wear masks on planes.

The Ministry of Land, Infrastructure and Transport said Thursday that refusing to wear a mask on a plane will qualify as a violation of the aviation security law starting next week.

Passengers who refuse can be turned over to the police. They could be fined up to 30 million won ($26,000) or get sent to jail for up to three years.

The ministry made the announcement amid a rising number of Covid-19 cases in Korea and an increasing number of incidents on U.S. carriers caused by passengers who refuse to comply with a federal face mask mandate.

In Korea, all passengers are mandated to wear a mask on public transport, including planes.

But current regulations don't specifically state that refusing to wear a mask is a violation of the aviation security law.

This made it difficult for airlines to decide whether to call in the police if faced with a passenger refusing to mask up.

The change “gives grounds for airlines to take stricter actions against those refusing to wear a mask," according to Shin Jeong-ok, a spokesperson for the transport ministry. "It is also a strong reminder to people that they should keep their masks on on a plane.”

Other changes to the aviation security law specifically addressing pandemic concerns include: prohibiting airlines flying domestic routes from serving beverages on planes; requiring flight attendants staying overseas to take precautionary health actions in all countries; requiring airlines to sterilize planes once a day if they flew domestically and once after every flight it flown internationally.

More Covid restrictions could be on the chopping block