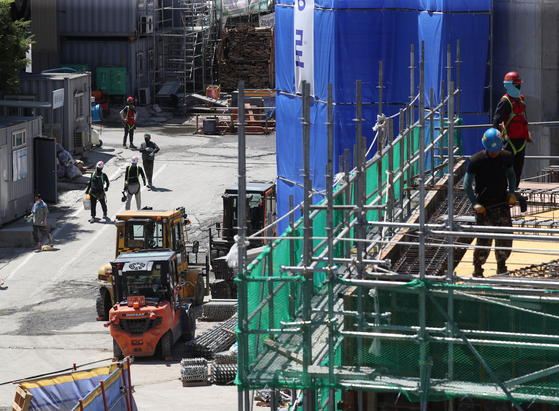 An apartment under construction in Seoul on July 26 [NEWS1]


The Ministry of Trade, Industry and Energy said Thursday it will endeavor to maintain a stable supply of steel products used in construction in the second half.

It plans to request construction companies avoid panic buying and to encourage steelmakers to operate their plants at a full capacity.

In a meeting that included the Ministry of Land, Infrastructure and Transport and the Fair Trade Commission, plans were formulated to ensure a stable supply of rebar and to monitor any acts of panic buying of rebar to prevent further price increases.

Rebar is steel bar used to reinforce concrete. It is made from recycled steel.

Its price has been rising recently as demand climbed following the government announcement to expand the housing supply, according to Yoo Hyun-ki, a spokesperson for Hyundai Steel.

“Reduced imports from China due to increased demand in China following the Covid-19 recovery has also driven up the rebar price in Korea,” Yoo added.

The price is expected to rebound after the summer, as more people return to construction work sites following the intense heat.

The industry ministry said it projects an extra 100,000 tons of rebar to be supplied in the market in the second half compared to the actual demand.

Demand for rebar in the July-December period is projected to stand around 5.5 million tons, up 9 percent on year. Supply during the same period is expected to rise 11 percent to 5.6 million tons, according to the production plans by domestic steelmakers.

But the ministry said it will take preemptive action in case of emergency, if demand is concentrated in a certain time period or if factories have to be temporarily shut.

Korea Customs Service will monitor rebar imports on a daily basis and use the information as a reference for the government's monitoring of supply.

“Domestic steelmakers plan to continuously supply the amount of [rebar] that is demanded by buyers in the second half through various measures, like distributing in the domestic market [rebar] that was to be exported,” said Kang Kyung-sung, head of the industry ministry’s industrial policy division in a statement.

“The government requests buyers to refrain from excessively worrying” about shortage of rebar products, as it “plans to request construction firms to refrain from buying more than they need.”