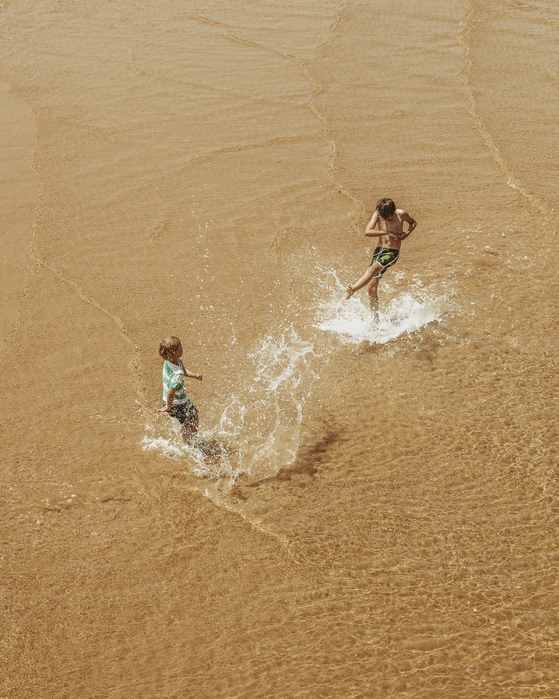 
If you're unable to take a vacation overseas this summer, why not satiate your craving for international travel by taking a trip to a photography exhibit titled, “Photographs by Yosigo: Holiday Memories.”

Spanish photographer Jose Javier Serrano, who uses Yosigo as his working name, has locals queuing up for some two-hours during the week to enter the exhibition hall. 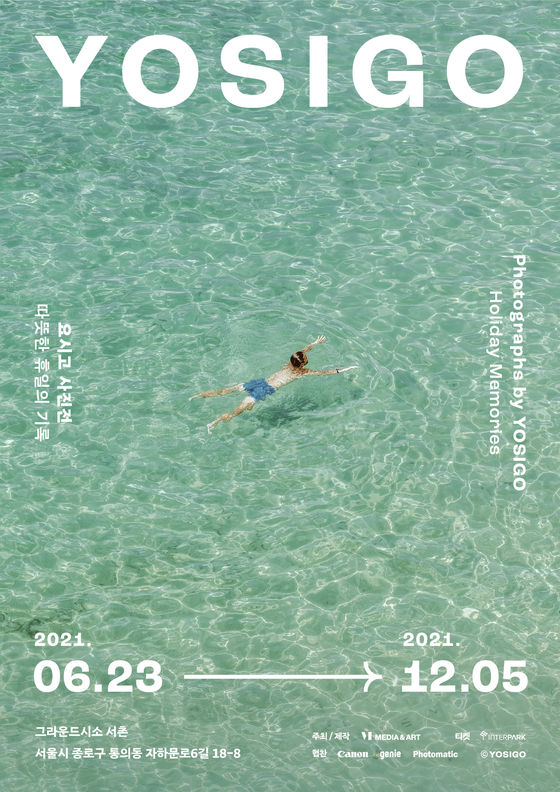 
The photos show scenes of many different beach towns like San Sebastian, the photographer’s hometown, and Miami, as well as Dubai’s sand dunes and Budapest’s outdoor baths.

Photos of people floating in a sparkling ocean have been hitting social media since the exhibition opened on June 23. By July, about 50,000 people saw the photos, according to exhibition organizer Media N Art.

“Go some time before the exhibition opens at 10 a.m. to get in faster,” or “I waited about an hour and a half to get in when I went on a weekday afternoon” are just some of the reviews warning future visitors to be aware of the long wait times.

The exhibition is ultimately Yosigo’s travel blog. You will find yourself surrounded by not only his travel snaps but also excerpts written by the photographer. Many visitors reminisce on their own time spent in the cities as they stroll through the exhibition. 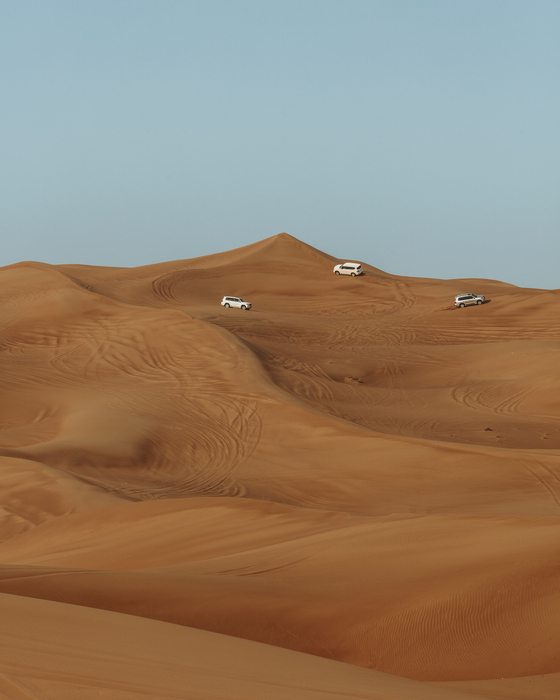 To add to the feeling of being overseas, the exhibition organizer has put sand in the room where photos taken in Dubai are on display. The sound of sand underfoot as you walk to get a closer to look at the photos of sand dunes can trick you, even if for just a second, to think that you are actually there.

“The entire exhibition made me feel like I was on my own travels,” said Kim Min-song, an office worker in Seoul who took a day off to go see the exhibition. She previously had one of Yosigo’s beach photos on her smartphone lock screen. “With the sand on the floor and some music playing that matches well with the photos, and especially the last exhibition room where the temperature actually went up a little with a space connected to the outdoor [terrace], it really reminded me of what I felt during my travels abroad, which I have forgotten in the past year.” 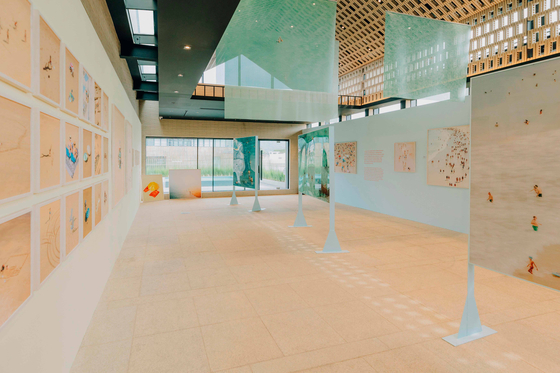 The photographer, from the beginning of the exhibition, focused on how to use light to record each moment on his camera. The subjects of the photographs are either architectural characteristics in the cities he visited, vague portraits of random people he spotted, or the overall landscape. 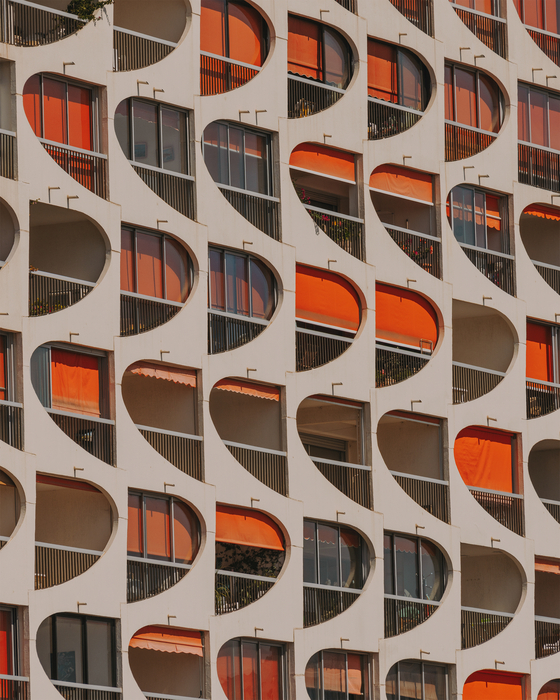 Although he initially felt that he had no real talent in design or photography, Yosigo was inspired by a poem his father wrote for him for his birthday that encouraged him to keep going. The poem was actually also the inspiration for the name Yosigo, which means "go forth."

Yosigo earned global attention around 2009 when his photos made the cover of U.S. magazine Wired as well as quarterly publication Colors by Benetton Group. As a photographer who understands the power of social media, a personal message from Yosigo is delivered via a screen set up in the exhibition hall in the format of an Instagram story. Throughout the exhibition, he continues to deliver the message that anyone can make things work.

Although his photos are very tranquil, the number of visitors flooding the exhibition halls makes the experience of viewing them not so serene. Looking at the photos for a few minutes is not an issue, but if you want to take a photo of your favorite photo without anyone in your frame, some patience may be required.

This hinderance is something Yosigo has experienced himself as described in the exhibition hall titled Tourism and Landscape. The photographer shared how tourists also make it hard for him to take photos, but is self-aware enough to also know that he is potentially one of these tourists blocking someone else's view.

“The presence of tourists obstructs what we really want to see. Rather than enjoying the landscape, they are only interested in letting others know they were there,” he said.

“In essence, they become predators to what nature is, intruding into its texture and colors. Here, I tried to achieve a balance between such tourists and the scenery.” 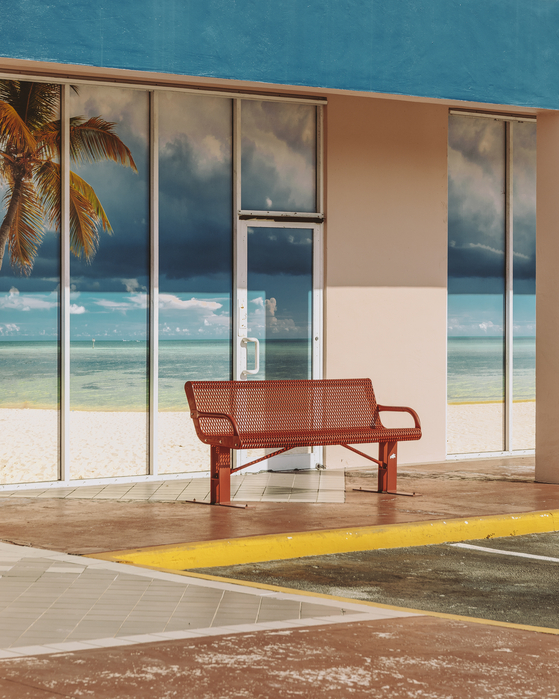 To help visitors get an insight into Yosigo's mind, an audio guide is available. Girls’ Generation member Choi Soo-young contributed her talents to explain more about the exhibition. There is a sign with a QR code to download mobile application Q Picker to listen to the guide.

The exhibition has collaborated with Genie Music to create a playlist to enjoy while taking a look at the photos.

At the end of the exhibit are goods printed with Yosigo’s photos. From small pouches to cell phone cases, as well as postcards and calendars, the shop is busy with visitors looking to purchase a souvenir. Posters are the most popular items, according to Media N Art. 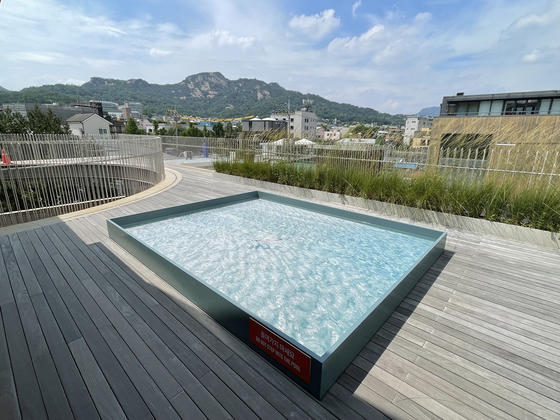 
The exhibition “Photographs by Yosigo: Holiday Memories” runs until Dec. 5 at Ground Seesaw Seochon in Jongno District, central Seoul. It opens from 10 a.m. to 7 p.m. every day except Mondays. Last admission is at 6 p.m. Tickets for adults are 15,000 won ($13.10) and children and teenagers are 12,000 won. To get there, go to Gyeongbokgung Station, line No. 3, exit 3. It is steps away from Daelim Museum. For more information, visit www.groundseesaw.co.kr or call 1522-1796.