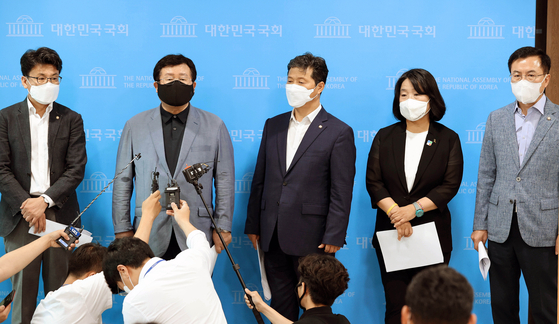 A group of 74 liberal lawmakers issued a joint statement Thursday calling for South Korea and the United States to postpone an annual summertime military exercise scheduled for later this month, announced in a press briefing by Democratic Party Rep. Sul Hoon, second from left, and other lawmakers at the National Assembly in western Seoul. [NEWS1]


A group of 74 liberal lawmakers issued a joint statement Thursday calling for South Korea and the United States to postpone their annual summertime military exercise scheduled for later this month.

The lawmakers led by the ruling Democratic Party (DP) said in the statement, “We can’t help but acknowledge that the South Korea-U.S. combined exercises is an obstacle in bringing North Korea to the negotiation table, regardless of its scale.”

They proposed Seoul and Washington “actively consider making a decision to postpone the joint exercise scheduled to be held in August.”

She said North Korea would be closely watching to see if South Korea chooses to follow through with “hostile war exercises in August" or makes another "bold decision."

Kim's remarks followed the restoration of inter-Korean communication lines on July 27, which had been severed by Pyongyang on June 9, 2020 in protest of what it claimed were Seoul's failures to prevent activists from sending propaganda leaflets across the border.

A group of lawmakers including DP Reps. Sul Hoon and Jin Sung-joon and independent Rep. Yoon Mee-hyang held a joint press conference at the National Assembly Thursday afternoon announcing the statement calling to delay the drill for the sake of resuming dialogue and improving inter-Korean relations.

They said that Pyongyang’s mention of the Seoul-Washington joint exercise after the restoration of communication lines “seems to indicate that they also want to resume dialogue, and that they needed an internal and external justification for this.”

The lawmakers’ statement, which follows recent remarks by Seoul’s Ministry of Unification and Park Jie-won, director of the National Intelligence Service, supporting the postponement of the joint drill, puts the summertime exercise with Washington in political and diplomatic crosshairs.

President Moon Jae-in told Defense Minister Suh Wook in a meeting with military commanders Wednesday to “carefully consider various factors” in regard to the joint exercise, said the Blue House. Suh said that Seoul's Defense Ministry is in consultation with quarantine authorities and the United States on the current Covid-19 situation and other “realistic conditions.”

The lawmakers’ statement ran counter to the view of the DP leadership.

Song Young-gil, chairman of the DP, told a YTN radio program Thursday morning that conducting the joint exercise is “inevitable,” repeating a message he has consistently conveyed in the past week.

Likewise, Kim Byung-joo, a DP deputy floor leader and a former deputy commander of the Republic of Korea-U.S. Combined Forces Command, said at a party policy coordination meeting Thursday, “It is now too late to argue for the postponement or cancelation of the joint exercise.”

He added, “It is not appropriate for political circles to call for a postponement or suspension of the exercise when most of the U.S. troops who will attend the drills are already in South Korea.”

However, Rep. Sul, a five-term lawmaker, said he hasn’t heard directly from DP chairman Song that the drill was inevitable, adding, “Even if it means negotiating with the United States again, delaying the exercise is a wiser way to deal with it.”

On the exercise already being in progress, he said, “It is in the preparation stage, so even if it is postponed now, it wouldn’t be a big problem.”

Joint military drills usually take between three months and a year to prepare for.

Later Thursday, in response to reporters' questions on the lawmakers' statement, Song said the DP leadership adheres to the view that the exercise needs to be carried out as scheduled.

Song referred to Kim Yo-jong’s statement and said, “It is not right to postpone for that kind of reason in a situation where training is already in progress.”

He said that the DP lawmakers’ statement “is as an expression of intention of members of the National Assembly, an independent constitutional institution."

The Ministry of National Defense repeated its stance Thursday that the “timing, scale and method" of the joint exercise has not yet been decided.