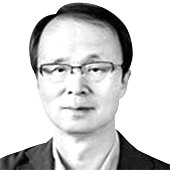 Kim Yong-suk
The author is a professor  of electronic engineering at Sungkyunkwan University and vice president of the Institute of Semiconductor Engineers.

Flanked by Samsung Electronics’ Vice Chairman Lee Jae-yong, left, at the company’s Hwaseong plant on April 30, 2019, President Moon Jae-in signs the world’s first 7-nanometer circuit wafer the company developed using extreme ultraviolet (EUV) lithography equipment on the sidelines of the government declaration of the “System Semiconductor Vision.”Kim Yong-suk
The author is a professor of electronic engineering at Sungkyunkwan University and vice president of the Institute of Semiconductor Engineers.


Semiconductors are called the “rice of industry.” Now, it is hard to find any electronic product without semiconductors. Recently, carmakers halted automobile production due to system-chip shortages. Ulsan plant 1 producing Hyundai Motors’ Ioniq 5 shut down for one week in April as they could not procure system semiconductors for cars.

Two types of semiconductors — memory chips and system chips — are used in electronic products. Memory chips, most notably DRAM and flash memory used in computers and smartphones, store data. System chips process data in computation and control. As memory chips are used in all products, they are mass produced and there are fewer types. But system chips are produced in small quantities and many different types are made as they should differ in each product.

Memory semiconductor prices fluctuate depending on supply and demand. There has been so-called super cycle of extended booms, but prices may fall drastically. The release of smartphones in 2009 and the data center facility investment in 2016 boosted demand for memory chips.

In the early 1980s, system chips were called “custom ICs,” as they reflect the orders of the market and customers. In the early 1990s, the term ASIC, or application-specific integrated circuit, was used. Now, they are called system semiconductors, or system chips.

A noteworthy example of system chips is the semiconductors used in smartphones. Smartphones are personal computers in your hand. Therefore, many functions of personal computers can be carried out by the chips of the phones. They are called the AP semiconductors for application processor. CPUs in the processors run the operating system and application software, allowing photography, web browsing and games.

Why should Korea focus on system chips now? It is not simply about the size of the market. It holds the key to competitiveness of products. Samsung and Apple, leading smartphone makers, produce their own APs for their products. The motivation to develop their own APs is to incorporate differentiated performance and functions in their products.

The architects of system chips are different from those designing memory chips. They need to understand the market and customers, and optimize the overall hardware and software. In other words, understanding of the integrated system is far more important than expertise on semiconductor properties.

Therefore, educating a semiconductor workforce at universities requires a revolutionary change of mindset. It is not right to assume that they are only educated and trained in semiconductor engineering majors or at institutes specializing in semiconductor research at universities. Other labs dealing with systems such as voice, video, communication signal processing and robotics should also proactively educate system chip experts.

Four years of undergraduate education is not enough. A good option is to offer five-year combined bachelor and master’s programs. Educational curriculum should be restructured to include all required subjects of system, software and semiconductors. Real-life projects choosing specifications, designing the system, and making chips with semiconductors need to be offered. Only then can the program produce a workforce that companies can readily use.

Key future industries of IoT, AI and 5G technologies are the backbones that will lead Korea, such as autonomous vehicles, smart factories, smart cities and healthcare. The competitiveness of these future industries come from system semiconductors. We can get ahead only when we have the capability to develop them on our own. The priority task is educating and training workforce specializing in system chips.

Korea and U.S. to discuss ways to strengthen semiconductor development