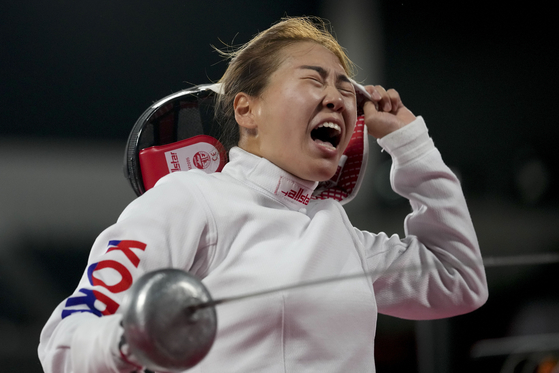 Kim Se-hee reacts after winning a bout in the fencing portion of the women's modern pentathlon at the 2020 Summer Olympics on Thursday in Tokyo. [AP/YONHAP]


Kim Se-hee finished second in the fencing ranking round of the women's modern pentathlon event on Thursday.

Modern pentathlon is based on five skills that were considered the core skills a cavalry officer needed: Fencing, swimming, horseback riding and laser-run. The first three sports determine who will start first in the laser-run round where the first to cross the finish line wins.

As the first day of the event, Thursday was dedicated to the fencing round robin as it is the most physically challenging. Pentathletes compete with the epee — the longest and heaviest of the three kinds of fencing swords — which is used to thrust toward the opponent's entire body.

With all fencers facing each other in the round robin, each match is a minute long, double hits do not count and the first to hit wins instantly unlike Olympic fencing. With 24 wins and 11 losses, Kim Se-hee finished second and Kim Sun-woo finished 14th with 19 wins and 16 losses. Annike Schleu of Germany topped the table with 29 victories and six defeats. In the men's event, Jung Jin-hwa finished fifth and Jun Woong-tae finished ninth.

The bulk of the women's modern pentathlon events will be held on Friday, starting with the 200-meter swimming heats at 2:30 p.m. The fencing bonus round and show jumping will follow, with the final laser run, a combination of running and shooting, set to start at 7:30 p.m. The men's events will follow on Saturday.