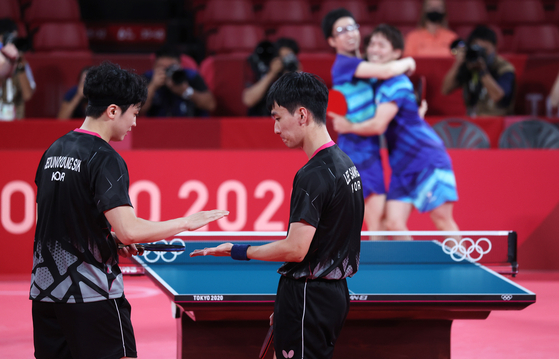 Lee Sang-su and Jeoung Young-sik console each other after dropping a point. [YONHAP]


Korea ended the table tennis men's team event of the 2020 Tokyo Olympics without a medal.

In the doubles match, things did not start off well for Korea, with Mizutani and Niwa establishing an early lead in the first few minutes of the game and driving it straight to 8-2.

Lee and Jeoung did not let up, however, and it even seemed as if a deuce could be forced when they brought it back all the way to 9-7, but Japan's duo was eventually able to close out 11-9.

The second set was more auspicious for Korea, with the duo inching ahead 5-3 early on. Things remained tense throughout, with Mizutani and Niwa managing to bring it back to a tie on two occasions, but not once did Lee and Jeoung hand over a lead. With the scoreline at 8-8, Korea scored three straight points to end.

Both teams kept at it, remaining at each other's heels and reaching 8-8 again in the third game. This time things were not decided so quickly — the scoreline went to 9-9, then reached a deuce. It seemed as if the back-and-forth would go on forever, but in the end, Japan took it 15-13.

That momentum seemed to bleed into the fourth game, with Mizutani and Niwa closing out the game and the match by reaching 11-5.

The following singles match between Jang and Harimoto seemed to be a repeat of the doubles bout, with Harimoto winning 3-1 after winning a deuce in the third game.

With Japan on the brink of victory, Jeoung managed to take down Niwa in the third match in straight sets to keep Korea in contention, but Mizutani repaid the favor to Jang in the fourth match, ending the decider and securing the bronze medal for Japan.