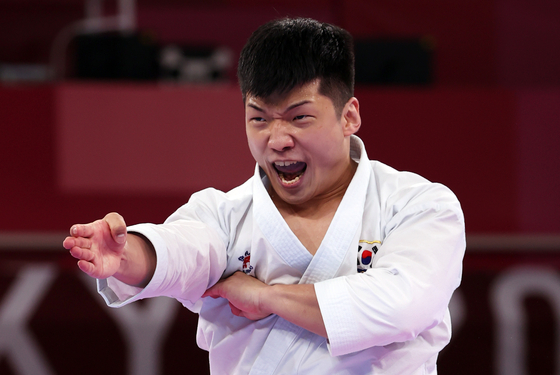 Park Hee-jun goes through his moves at the men's kata. [YONHAP]


Park Hee-jun left the men's kata event of the 2020 Tokyo Olympics without a medal, tied for fifth place, at Nippon Budokan on Friday evening.

In kata, which means "forms" in Japanese, athletes demonstrate offensive and defensive movements without an opponent. Technical performance is evaluated based on the practitioners' stance, technique, transitional movements, timing, breathing, focus and consistency; athletic performance is based on strength, speed and balance.

Earlier in the day, Park made it to the bronze medal bout by finishing third in his group three straight times — in both elimination round katas and the ranking round kata. Spain's Damian Quintero and the United States' Ariel Torres Gutierrez took first and second, respectively, on all three occasions.

In the medal decider, Park scored 26.14, losing to Turkey's Ali Sofuoglu, who scored 27.26. Park's score was his best performance on the day.

Karate made its Olympics debut this year, and Park was the only Korean participant. Friday's showing is likely to be his final time at the Games, as the sport will not be a part of Paris 2024.