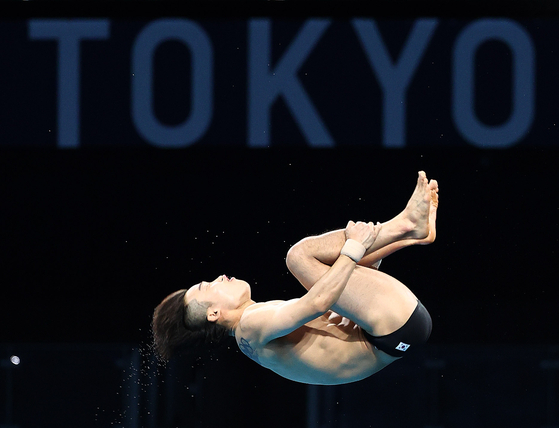 Woo Ha-ram launches himself for a dive at Tokyo Aquatics Centre. [YONHAP]


Woo Ha-ram finished the preliminary round of the men's individual 10-meter platform event in 7th place with a 427.25 point total, qualifying for the semifinals and keeping hopes alive of becoming the first-ever Korean diver to medal at the Summer Olympics.

A total of 29 divers participated in the preliminary on Friday afternoon at Tokyo Aquatics Centre, with the top 18 qualifying for the semifinal.

The top spot was taken by China's Yang Jian, with a whopping 546.90 points.

Woo, who currently stands at No. 12 in the world for the three-meter men’s individual springboard and No. 21 for the men’s individual platform, has quietly been one of Korea's highlights at this year's Games.

On Tuesday, he became the highest-ranked Korean diver ever at the Olympics by finishing in fourth place in the men's three-meter springboard diving contest, narrowly missing out on a medal.

Previously at the 2016 Rio Olympics, Woo became the first Korean diver to advance to the finals of the 10-meter platform event, in which he placed 11th. He looks to be on track to best that record this year.

The semifinals and the finals will take place on Saturday.