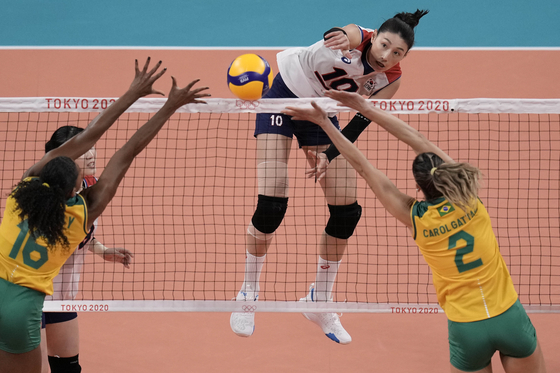 Kim Yeon-koung, center, hits the ball during the women's volleyball semifinal match between Brazil and Korea at the 2020 Summer Olympics on Friday in Tokyo. [AP/YONHAP]


The Korean women's volleyball team will continue its hunt for some Olympic silverware in the bronze medal match on Sunday, after losing to world No. 2 Brazil in straight sets in the semifinals on Friday.


Korea has been fighting tooth and nail against higher-ranked teams en route to the bronze medal match. The semifinal against the second-best team in the world on Friday evening was arguably the toughest challenge yet, with Korea unable to find a way to break through against the powerful opponent.

Brazil's Tandara Caixeta, part of the 2012 gold medal-winning team, was missing from the start list after being suspended for doping. The Brazilian Olympic Committee broke the news before the semifinal that she had failed a test on July 7, removing her from the Games. In team sports, countries are only punished when three or more athletes fail the test.

The loss of a key player did little to stop the Brazilian onslaught, winning the game in straight sets.Four of the top 10 scorers at the 2020 Tokyo Games are on the Brazilian team, and that advantage was obvious on Friday. While Korea put up a good fight, they were unable to stop the South American team's ferocious spikes, with Fernanda Rodrigues scoring 17 points alone. Korea conceded 40 points to Brazil's attacks, but had 15 of their own attempts blocked by the South American side. 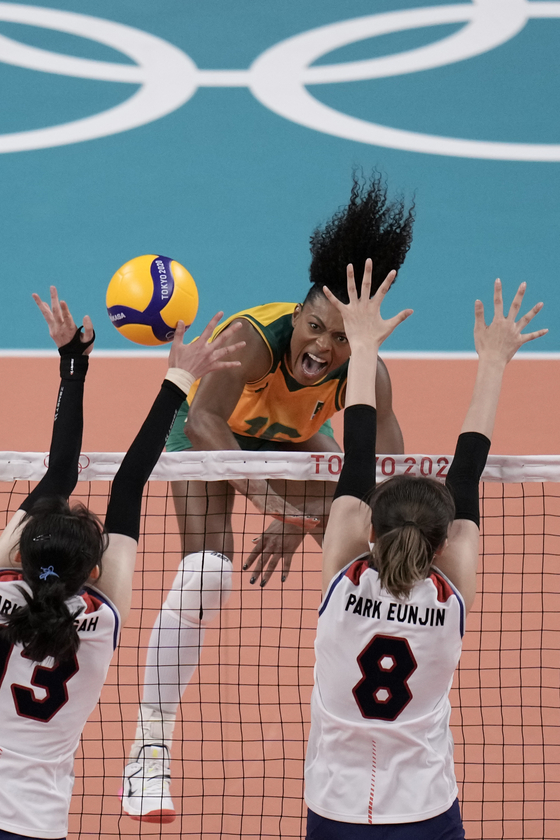 Brazil's Fernanda Garay Rodrigues, center, spikes a ball during a women's volleyball semifinal match against Korea, at the 2020 Summer Olympics on Friday in Tokyo. [AP/YONHAP]


However, Korea put up a good defense with stable receptions and digs. Korea was able to control received balls well, turning dangers attacks into opportunities to counter. Talismanic captain Kim Yeon-koung was in the middle of it all, swooping in to receive the ball when she needed to and to smash it in whenever she had a chance, giving all she had to make her last attempt at a medal count. She tallied 10 points against Brazil, the highest of any player on the Korean team, but much less than in any other match. Kim Yeon-koung made history earlier in the Games as the first player ever to record 30 or more point in an Olympic match four times.

Despite the loss, reaching the semifinals is already something of an achievement for Team Korea. The last time Korea reached the semifinals was at the 2012 London Games. Kim Yeon-koung, Yang Hyo-jin and Kim Hee-jin are the only remaining players from that team, which beat Italy to advance to the semifinals, but lost to the United States. In the bronze medal match in 2012, Korea lost in straight sets to Japan.