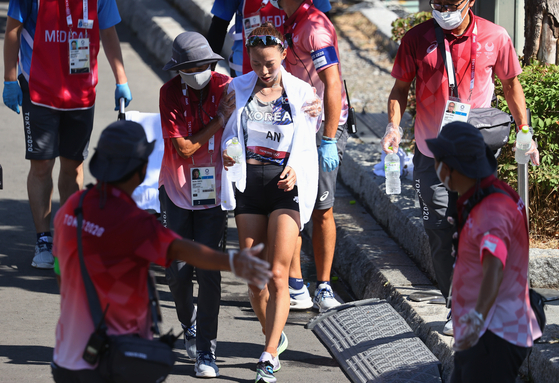 An Seul-ki of Korea is assisted at the finishing line of the women's marathon race at Sapporo Odori Park, Sapporo, Japan on Saturday. [REUTERS/YONHAP]

Choi Kyung-sun and An Seul-ki represented Korea in the women's marathon, both running their season best. 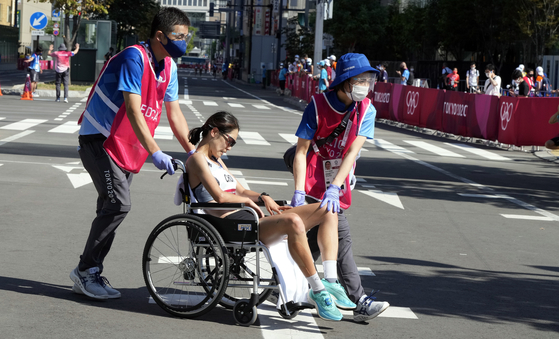 Cho Kyung-sun is helped away after crossing the finish line during the women's marathon at the Odori Park in Sapporo, Japan on Saturday. [EPA/YOHAP]

A 34th and 57th finish may come as a disappointment for Korea since both of Korea's medals in athletics have come in the marathon event, which Korea briefly excelled at back in the early 1990s. The first athletics medal went to Hwang Young-cho, who won gold in the men's marathon at the 1992 Barcelona Olympics. Four years later, Lee Bong-ju picked up silver in the marathon at the 1996 Atlanta Games.

But with 15 runners failing to complete the course, running the full 42.195 kilometers in sweltering heat that at one point reached 34 degrees with 85 percent humidity and recording a season best on the big stage is something of an accomplishment for the two marathoners. 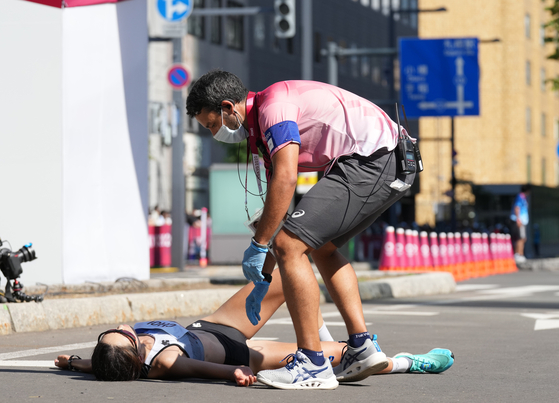 A staff member helps Choi Kyung-sun on the ground during the women's marathon final at the Tokyo 2020 Olympic Games in Sapporo, Japan on Saturday. [Xinhua/YONHAP]


Korea's race to a marathon medal is not over yet, with Oh Joo-han and Shim Jung-sub warming up for the men's marathon which is traditionally the last event at the Olympics. The men's marathon will start at 7 a.m. on Aug. 8.