Another day, another design ― Digital watches get a face-lift

Another day, another design ― Digital watches get a face-lift 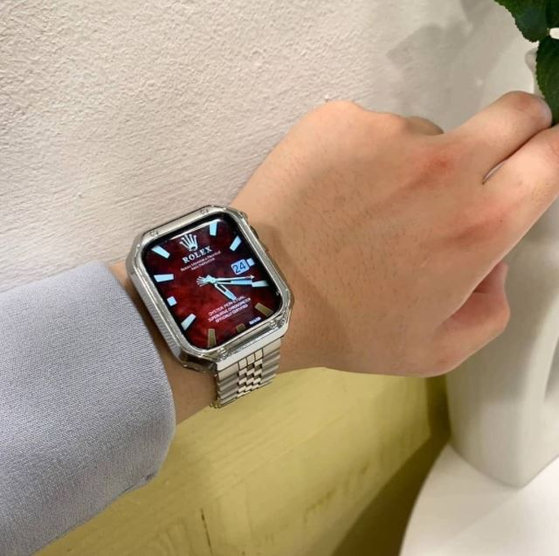 
Donning a luxury watch on your wrist may not be as expensive as you think. Downloading one for free is the newest idea.

Mr. Park, a 29-year-old office worker, wears a watch with a Rolex dial one day and a Cartier dial the next. He didn’t buy the high-end watches, but simply customized the watch face of his Apple Watch. When Park wears formal office attire to work, he changes the Apple Watch to resemble Rolex's Jubilee. A watch face that looks like an electronic Casio is his pick for a casual jog outside.

“It feels like I’m given dozens of watches to choose from every day,” said Park. “It’s fun to change my smart watch into an entirely different looking product with just a few clicks, and it almost seems like a scene from a sci-fi movie.”

Some 912,000 smart watches were sold in Korea last year according to market research firm Euromonitor, up 3.6 percent on year. With many owning the same electronic gadgets, people in their 20s and 30s are finding ways to make theirs stand out from the crowd.

Smartwatch makers like Samsung and Apple provide a selection of default watch faces for their customers to choose from, but users want to give their smart watches a more personalized tweak.

Watch interface customization applications such as Clockology are gaining popularity. According to mobile app tracker App Annie, the application ranked No. 1 on the Korean Apple App Store’s Graphics & Design category by downloads since July 16, only briefly falling to No. 2 on July 27 before quickly reclaiming top spot the next day.

Users can make their own watch face designs or download ones that others have made and posted online. Just about any high-end watch dial can be found online, ranging from some resembling Patek Philippe, Rolex and Cartier to designs with logos of famous fashion houses such as Gucci and Louis Vuitton.


Some might call it all a bit pretentious, but Suh Yong-gu, a professor teaching business at Sookmyung Women's University, disagrees. A Rolex dial on an Apple Watch is obviously fake, and young Koreans are just trying to have fun and find unique ways to personalize a ready-made product.

“Young people are stressed by gender conflicts, unemployment and the pandemic, and they tend to buy things that have an element of comedy to enjoy a light laugh,” Suh said. “They’re not trying to look like they wear fake luxury watches out of an inferiority complex of not being able to afford one, but just trying to joke about the fact than an Apple Watch can be no different than a high-end watch worth tens of millions of won.”

Although downloading these watch faces are free, changing the watch straps or buying other accessories aren’t. But many are still willing to cash in.

Apple has a collaboration with Hermes, offering a variety of Hermes’ leather and textile watch bands. The straps retail for some 500,000 to 700,000 won ($400 to $600) while other silicone and leather straps sell for some 100,000 won. Damiani, an Italy-based high-end jewelry company has been selling Apple Watch covers encrusted with diamonds for 9.6 million won.

Those who want a variety at a cheaper price turn to online shopping, purchasing smart watch bands in bulk and choosing a new one every day to fit their mood or fashion.

“Purchasing expensive accessories every time is too much — once you’re into collecting smart watch straps, you're going to buy more than three or four,” said Ms. Jung, a 27-year-old grad school student. “On AliExpress, you can buy a pleather band for a few thousand won, so I often order more than 10 at once.”