Fans at home kept rancor down for this Olympics

Fans at home kept rancor down for this Olympics 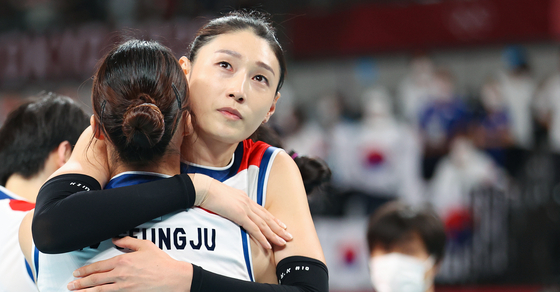 Captain Kim Yeon-koung hugs Pyo Seung-ju after the Korean women’s volleyball team was defeated by Serbia in the bronze medal match at Ariake Arena in Tokyo on Sunday. Korean viewers expressed warm support for the volleyball team, which entered the tournament as an underdog and fought its way up to the semifinal. [YONHAP]


When the women's volleyball team didn't make the semifinals at the 2016 Olympics in Rio de Janeiro, it suffered brutal abuse from fans back home. "Don't come back to Korea!" one person wrote on social media. "Traitors!" wrote another.

This year in Tokyo, the team once again failed to win a medal. Only this time, they were showered with praise.

And such positivity from fans back home was not exclusive to volleyball.

Encouragement of Olympians -- even in their losses -- was a surprising turn from Koreans' tendency to criticize. In the past, even silver and bronze medalists were lambasted for not trying hard enough.

In the 2021 Tokyo Olympics, which closed Sunday, attention was paid not only to medals but also the athletes' blood, sweat and tears. All the athletes who participated and gave their all were hailed as champions.

Video clips of fourth place athletes who came close to a medal -- such as the 25-year-old high jumper Woo Sang-heok and women's volleyball team captain Kim Yeon-koung -- made it to YouTube's trending list while some medal ceremony clips with Koreans did not. When the athletes showed tears of disappointment and frustration, public responses largely read, "It's okay."

Proof of a fighting spirit at this year's Olympics seemed to resonate with the nation. After the women's volleyball team's hard loss against Brazil in the semifinals on Friday, which was watched by 800,000 people online, the team was comforted with comments such as, "We can't always win," and, "You did well enough."

Similarly, the team received praise after losing the match for bronze with Serbia on Sunday.

Encouragements on Twitter surpassed 470,000 tweets as of 4 p.m. Sunday.

The new and improved spectator culture also looked to the future instead of dwelling on losses.

When 17-year-old archer Kim Je-deok did not pass the preliminary round in the individual category, the online community used #Let'sGo to indicate that it was okay for Kim to lose -- because he would undoubtedly be going to the 2024 Paris Olympics.

For high jumper Woo Sang-hyeok, who could not overcome the 2.39 meters needed to win a medal, and swimmer Hwang Sun-woo, who placed fifth in men's 100-meter freestyle, the nation cheered them on and concentrated on their potential in the future.

"It was an Olympics that focused on process rather than outcome," said Kang Byeong-chan. a 26-year old university student. "I don't remember Korea's ranking in the Olympics, but I could see all the time and effort spent by the athletes for four years. I couldn't not cheer them on."

The athletes themselves were surprised by the public's response. "I am a little stunned by all the attention and positivity," said Kim Yeon-koung of the national women's volleyball team, which placed fourth in this year's Olympics.
Moreover, relatively obscure athletes and sport categories received attention. A case in point was sport climbing. The 17-year-old sport climber Seo Chae-hyun's match on Naver's OnAir live stream got 40,000 viewers. She placed eighth overall.

While criticism was muted, it didn't vanish completely -- especially when national athletes were judged to be slacking off or getting unfair advantages.

National baseball team player Kang Baek-ho received widespread criticism after he was caught on camera exaggeratedly chewing gum during the match for bronze medal against the Dominican Republic.

"We just saw Kang Baek-ho on screen… He really shouldn't behave like that," said retired South Korean baseball icon Park Chan-ho on the live broadcast. "Even if we lose, athletes should show their fighting spirit until the very end."

The online community also raged. "We can't judge him by one camera shot but I wish he could show better attitude," a comment said.

A national petition was posted on Blue House's website titled "Please do not exempt the 2020 Tokyo Olympic national baseball team from military service." As of Sunday, the petition had been signed by 7,000 people.