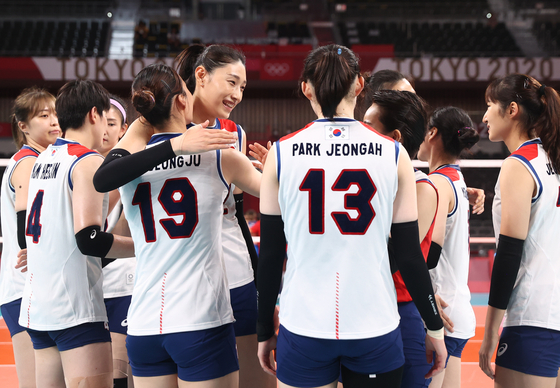 
The Korean women's volleyball team finishes its Olympic journey without a medal, but the squad heads home with their heads held high.

Korea lost in straight sets in the bronze medal match against Serbia on Sunday.

Despite putting up a serious fight, the first two sets saw Serbia lead by a significant margin: 25-18, 25-15. In the third set Korea looked stronger at the start, leading for the first few points. Serbia again pulled ahead, widening the gap to eventually take the set 25-15 to win the match and the bronze medal. Tijana Boskovic was a crucial part of that victory for Serbia, scoring 33 of the team's 75 points.

Going into the Games, the chance of Team Korea even reaching the semifinals was slim. Not only was Korea ranked 13th in the world, the third lowest ranked team at the Olympics, but it was also coming back from a disappointing second-to-last finish at the Volleyball Nations League in June. Compounding the issue, veterans Kim Hee-jin and Kim Su-ji were out of commission due to injuries.

But Team Korea and it talismanic captain Kim Yeon-koung defied the odds, fighting tooth and nail against higher-ranked teams to reach the semifinals.

Despite dropping their first game of the games against No. 2 Brazil, Korea bounced back to beat Kenya in straight sets. The third match against the No. 7 Dominican Republic was when Team Korea started to really build momentum. After pressuring the higher-ranked team to a fifth set, Korea won the last set to grasp a 3-2 victory. That winning streak continued in the next match against No. 10 Japan, when Korea once again pushed the match in to the fifth set to add another win. 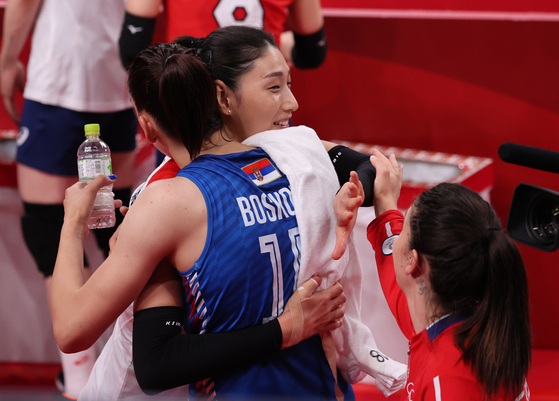 
It has been a long journey for captain Kim Yeon-koung, who arrived in Tokyo after playing full time at most of the Volleyball Nations League matches. She played the entirety of six Olympic matches, resting only during two: The preliminary matches against Brazil and Serbia, where she sat out the third set.

Despite the loss, reaching the semifinals is already something of an achievement for Team Korea. The last time Korea reached the semifinals was at the 2012 London Games. Kim Yeon-koung, Yang Hyo-jin and Kim Hee-jin are the only remaining players from that team. In the bronze medal match in 2012, Korea lost in straight sets to Japan.

For those players, the Tokyo Olympics was their third and, at least for captain Kim Yeon-koung, last time on the national team. 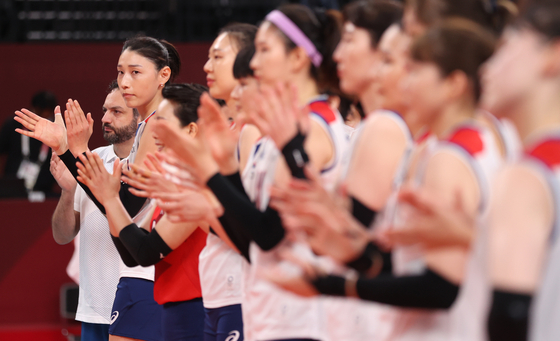 Kim Yeon-koung and the Korean volleyball team claps for the Serbian team after the women's volleyball bronze medal match on Sunday morning at Ariake Arena in Tokyo. [YONHAP]


“It’s still hard to believe that this is really my last time,” said Kim Yeon-koung in tears in a post-match interview. “I didn’t really feel different until when I was tying my shoelaces [before this match], when I realized that this was really the last.”

“I am so proud that we defied all odds to reach this level. The process of preparing for the Olympics, winning each match with all the attention and support was an unforgettable experience that I will cherish until I die.”