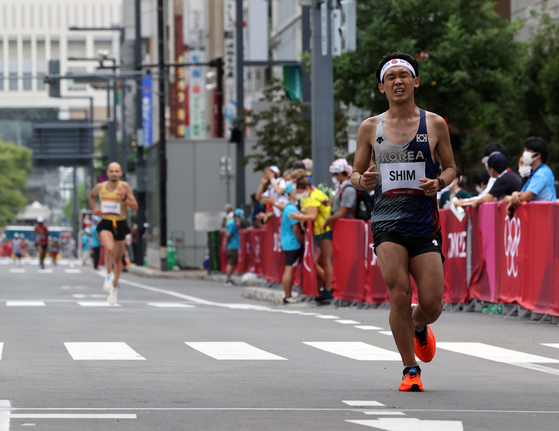 Shim finished 11 minutes and 58 second behind gold medalist Eliud Kipchoge of Kenya, who crossed the finish line in two hours eight minutes and 38 seconds, defending his Rio Games gold medal. With Kipchoge’s gold, Kenya has taken both marathon gold medals in Tokyo. Kipchoge is the world record holder with a time of two hours one minute and 39 seconds set at the 2018 Berlin Marathon.

Olympic records are usually slower than the world record since most records are set with the benefit of pacemakers on level courses. Especially at the Tokyo Games, the heat and humidity was of no help as the temperatures reached 34 degrees in the women’s race. On Sunday, temperatures reached 28 degrees with a humidity of 72 percent and runners were seen pouring water and ice over themselves to cool down with 30 runners failing to complete the race. 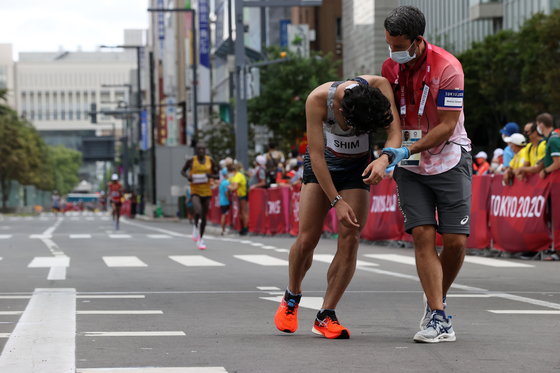 Shim Jung-sub is helped away by a staff member after crossing the finish line of the men's marathon race in Sapporo, Japan on Sunday morning. [JOINT PRESS CORPS]


Shim is a two-time Olympian, his 49th finish comes as a big improvement on his 138th finish that took two hours 42 minutes and 42 seconds at the 2016 Rio Games, when he was struggling with an injury.

The only other Korean who ran the race was Oh Joo-han, a naturalized athlete born in Kenya. Despite a strong start that saw Oh passing the 10 kilometer point at sixth place 31 minutes into the race, Oh suddenly slowed down and halted grabbing the back of his left hamstring at 13.5 kilometers. Walking for a while to test out his leg, Oh seemed to be back on track but soon after, he fell out of the race before he reached the 15 kilometer point. 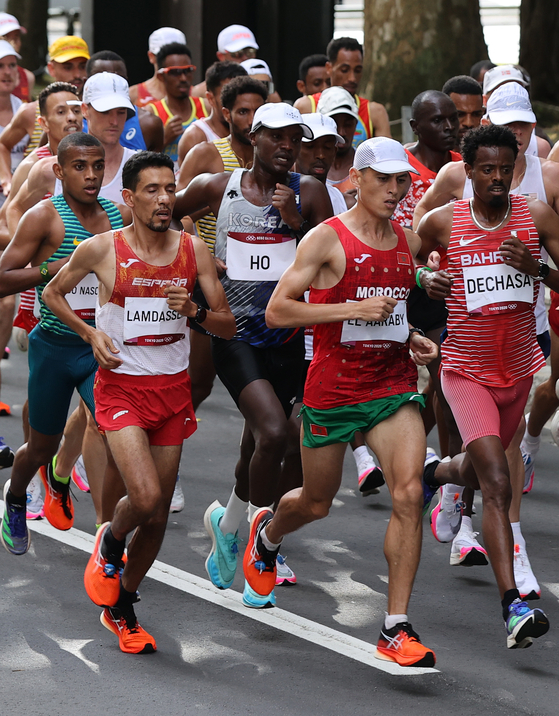 
Both of Korea's past medals in athletics have come in marathon, where Korea briefly excelled in the early 1990s. The first athletics medal went to Hwang Young-cho, who won gold in the men's marathon at the 1992 Barcelona Olympics. Four years later, Lee Bong-ju picked up silver in the marathon at the 1996 Atlanta Games. Korea will have to wait another three years to get a shot at redemption in the sport.