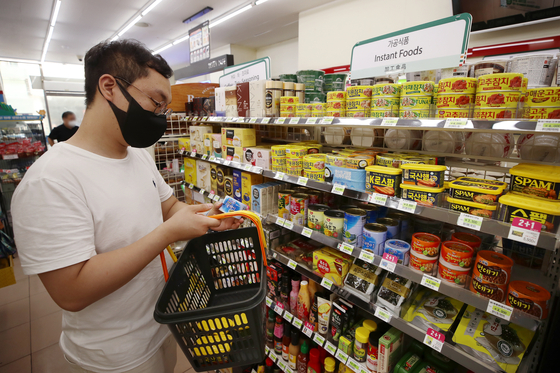 A customer shops at a convenience store in Seoul on Aug. 4. The service industry and retail sales grew in the second quarter. The government emergency relief grant while designed to help boost such retail sales, the ongoing resurgence of Covid-19 is expected to undercut such efforts. [YONHAP]

Services including retail sales were starting to rebound in the second quarter before the fourth wave of Covid-19 infections.

According to Statistics Korea on Monday, service industries grew 5.7 percent in the second quarter, including wholesale businesses, retail, finance and the logistics and storage industry.

This was the second consecutive quarter in which the service sector grew, and the growth rate was more than double the 2.2 percent growth in the first quarter.

Recovery was particularly strong in major cities including Seoul, Busan and Jeju.

Much of the growth was driven by the logistics and storage industry. They benefited from a spike in online purchases.

In Seoul, the logistics and storages industry grew 25.1 percent followed by finance and insurance, which grew 11.8 percent thanks to increased investments in stocks.

In Busan, the logistics and storage industry grew 12 percent and wholesale and retail grew 5.9 percent.

While services in all regions grew, North Jeolla saw the slowest rate of 2.3 percent year-on-year.


Retail sales in all regions grew 4.4 percent led by duty free sales in Jeju as well as in department stores.

It was the second consecutive quarter in which retail spending grew overall.  Growth in the first quarter was larger at 6.4 percent.

Other than Jeju, Seoul and Busan, all other regions saw retail sales decline compared to a year earlier. The reason why, according to a statistics agency official, is because of spending increases in the second quarter of 2020 spurred by emergency relief grants given by the government.

In May 2020, the government gave up to 1 million won to each household to stimulate domestic mark.

Increases in duty free and department store sales are also considered to reflect a big slump in the second quarter of 2020.

Jeju saw the sharpest increase in retail sales, 15.7 percent, while Seoul's were up 6.4 percent and Busan's 4.8 percent.

The slowest growth in retail sales was seen in Ulsan, negative 5.8 percent year-on-year.

The government has been hoping to spur retail sales again with a second round of emergency relief grants.

People in the top 12 percent income bracket are not eligible. The government plans to distribute the grants before the Chuseok holidays next month.

But the ongoing Covid-19 crisis is still a challenge.

In a report released Sunday, the state-owed Korea Development Institute (KDI) noted that the domestic economy could be hit hard by the fourth wave of infections, particularly services hurt by strict social distancing regulations.

This is a reversal of its prediction in May and June, when it said it expected an economic recovery.


The KDI did a survey of 16 experts, who projected the economy would grow 4 percent this year.

While this projection is higher than the 3.6 percent the institute published in April, it is lower than the 4.2 percent target set by the government.