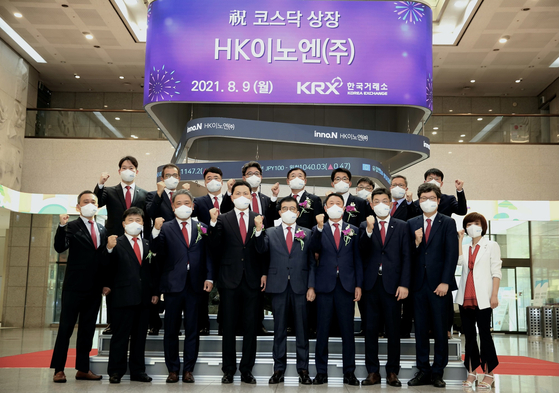 
HK inno.N, the Korean maker of hangover helpers and pharmaceuticals, finished its first day of trading up 16 percent from its offering price of 59,000 won ($52).

Shares closed at 68,500 won Monday after choppy trading. The first day's trading ended significantly lower than other recent IPOs: KakaoBank, which made its Kospi debut on Friday, closed up 79 percent on the first trading day and SK Bioscience closed up 160 percent in March.

The company’s market capitalization settled at around 1.98 trillion won Monday, making it the 24th largest company on the Kosdaq, ahead of battery material company EcoPro.

It opened at 68,100 won per share, 15.4 percent higher than the subscription price of 59,000 won, but far less than the maximum 200 percent recently hit by a number of public offerings in Korea.

Trading started slow, with shares falling as low as 68,000 won as soon as the market opened. The price continued to fluctuate until it rose as high as 78,900 won, up 15.86 percent from the starting price, before falling again.

The company reported 27.9 billion won net profit in 2020. Based on last year’s results, it is trading at about 71 times earnings.

A spin-off from CJ CheilJedang’s pharmaceutical business, the company was founded in 2014 as CJ HealthCare. It was then acquired by Kolmar Korea in 2018 and changed its name to HK inno.N last year.

The company’s K-CAB Tab, which treats gastroesophageal reflux disease, has been exported to 24 countries so far. It is now undergoing phase 1 clinical trials in the United States.

“I sincerely appreciate all who helped our company to make a successful debut on the Kosdaq market,” said HK inno.N CEO Kang Seok-hee Monday. “HK inno.N will grow as a global top tier biohealth company by developing more new drugs, making investments in future businesses and expanding our presence in global market.”