Stocks fall for a third day as rate concerns return

Stocks fall for a third day as rate concerns return 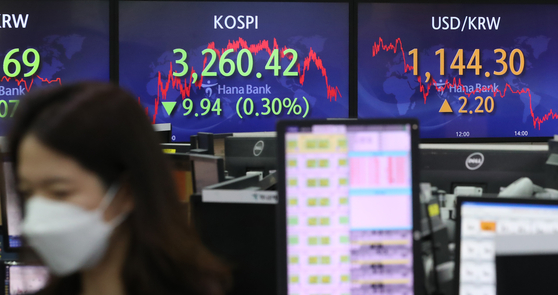 A screen in Hana Bank's trading room in central Seoul shows the Kospi closing at 3,260.42 points on Monday, down 9.94 points, or 0.3 percent, from the previous trading day. [YONHAP]


Stocks retreated for the third straight session Monday after choppy trading, as an estimate-beating improvement in U.S. jobs data increased concerns about an early tapering. The won fell against the dollar.

The Kospi got off to a weak start as U.S. jobs data in July logged a steeper hike than the market consensus, fueling investor worries that the U.S. Fed may pivot from its dovish stance and consider accelerating its timeline for a rollback of its accommodative policies.

The Kospi retreated toward the session's close as Kakao Bank trimmed its gains.

"Kakao Bank surged on the Kospi, but other [large] stocks' losses eventually offset its gains," he added.

The local currency closed at 1,144.3 won against the dollar, up 2.2 won from the previous session's close.