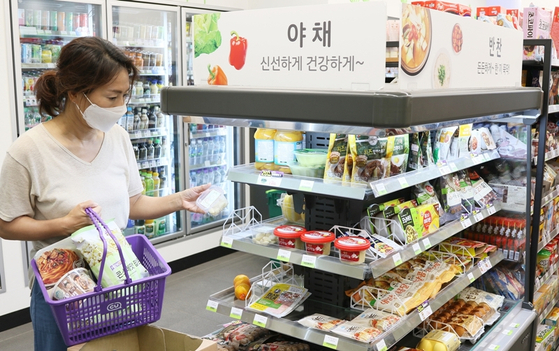 A model shops at a convenience store. [BGF RETAIL]


Convenience stores are trying to position themselves as more affordable alternatives to the big discount supermarkets, selling low-cost house-brand items including ramyeon and microwaveable rice.

The timing is clever as recent spikes in prices of eggs and fruits and vegetables, and the prolonged Covid-19 crisis, are prompting people to look for affordable products close to home.

BGF Retail’s CU said its inexpensive private label ramyeon was its best-selling packaged ramen in April and May. GS Retail said sales of its private label bakery line of products rose more than 20 percent over the past week compared to a week before.

On Monday, CU said its house brand Heyroo ramyeon was the best-selling packaged ramen at CU stores for the two months following its release in April. Heyroo ramyeon sells for 380 won ($0.3), which is around a quarter of the price of rivals like Nongshim’s famous Shin Ramyun and Jjapaghetti.

Heyroo ramyeon sales fell to the fifth most popular in July.

“CU has lowered prices by up to 55 percent by reducing the retail processes,” said BGF Retail in a statement. It added that it has “responded to the price war” by offering more affordable products to customers closer to home.

BGF Retail said sales of its bakery brand Breadique, which sells around 30 types of breads like melon- and chocolate-flavored pastries, jumped 21.4 percent from Aug. 1 through Sunday compared to the same period a month earlier. Sales of its GS25 coffee, sold on a buy-one-get-one-free basis, shot up 30.9 percent during the same period.

7-Eleven said its dosirak (packaged meal) sales rose more than 30 percent on-year for five days from Aug. 4 through Sunday after it cut prices.

Its private label dosirak sell for 2,200 won, around half the price of competing products, which sell for between 4,500 and 5,000 won.

“We are trying to change people’s perception that convenience stores are expensive,” said Lim Do-hyun, a spokesperson for 7-Eleven. “So we are offering numerous promotions to change that perception at a time when people have grown sensitive to increased consumer prices.”

Analysts say convenience stores have benefitted from people not wanting to travel far during the pandemic. But they've also been hurt by the shift to online shopping.

This Pepero Day, give them Teletubbies, Minions and underwear