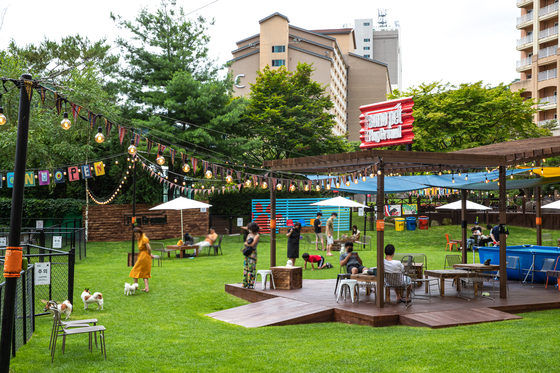 
“It’s a dog’s life” as an expression may have to be retired soon. Or at least used to mean something very different.
In Korea, many dogs are living large.

Lee Seul-gi, a 31 year old, recently spent summer vacation with her Pomeranian at a hotel in Gangneung, Gangwon.

“The hotel that I wanted to go was about 300,000 won [$260] a day, but it said their rooms were booked solid for the next month,” said Lee. “It was hard to find a hotel that allowed me to bring dogs a few years ago, but now I’m given a plenty of choices from high-end hotels to guest houses.”

According to the Ministry of Agriculture, Food and Rural Affairs, there were 15 million pet owners last year, which is almost one fourth of Korea’s population. The pet market sales were about 3.4 trillion won last year, up 14 percent on year, according the Korea Rural Economic Institute.

With an increasing number of pet owners and a flourishing industry serving them, many hotels that had once said no to pets have become pet-friendly.

A separate building at Vivaldi Park in Hongcheon County, Gangwon and Sono Calm Goyang, Gyeonggi — with total of 184 rooms — was opened to guests with pets last July. According to Sono Pet Clubs & Resorts, which operates the pet-exclusive sections of the hotels, the rooms had an occupancy rate of 72 percent this July, up 28 percentage points on year. For the weekends, more than 90 percent of the rooms are full.

The sections are entirely remodeled to be comfortable for domesticated animals. All rooms have a special non-slip flooring that make it easy for the pets to run around, and a low bed makes it easy for them to jump on and off the beds. Playgrounds for pets, veterinary clinics and pet salons are located in both hotels. 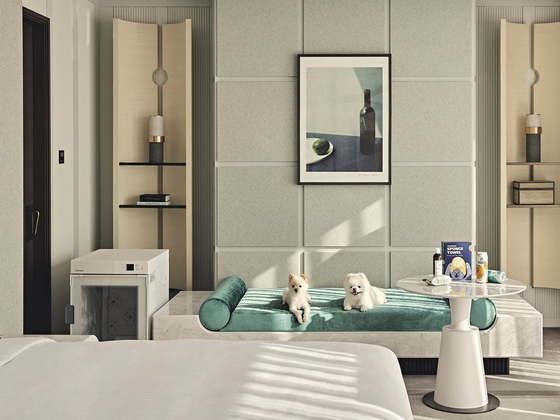 
Although pet-accommodating rooms are twice the price of normal rooms, ranging from 300,000 won to 700,000 won a day, people are more than willing to pay the price.

“Except for a few recent cancellations due to Covid-19, we’re almost fully booked,” said Choi Jong-jin, a manager at Sono Pet Clubs & Resorts. “There’s an increasing number of other guest houses in Hongcheon that are entirely switching as pet-friendly.”

The entire ninth floor of Shinsegae’s L’Escape is dedicated to visitors with pets, and the hotel offers a similar deal in which guests with accompanying pets are provided a pet bed, snacks and shampoo.

In August, BGF Retail started selling three pet foods — samgyetang, duck stew and dried pollack stew — for dogs and cats at CU convenience stores. The release was timed so that pets can also get a hearty meal for Malbok, one of the three hottest days in which Koreans normally eat samgyetang. 11st announced that it will be providing overnight deliveries of pet supplies such as toys, foods and snacks in the greater Seoul area starting Aug. 2.

“Cheaper pet food sold well in the past, but those that are 80,000 to 90,000 won for a 2-kilogram [4.4 pound] pack sell well, since people are very selective about ingredients these days,” said Lee Jung-wook, a buyer at Molly’s Pet Shop, a pet supply store chain owned by Emart. “Another change is that the pet industry was mostly made up of small businesses, but big names, such as Harim, Pulmuone, Cheong Kwan Jang and LG Household & Health Care, have entered the market.”

The pet care market is expected to grow even more.

“People met with fewer people due to Covid-19 and spent more time with their pets,” said Jeon Mi-young, CEO of Trend Korea Company. “Young people who are conscious about the environment and animal rights treat their pets like human beings, and the pet market will continue to grow as more Koreans consider pets as life companions, as they do in other countries.”