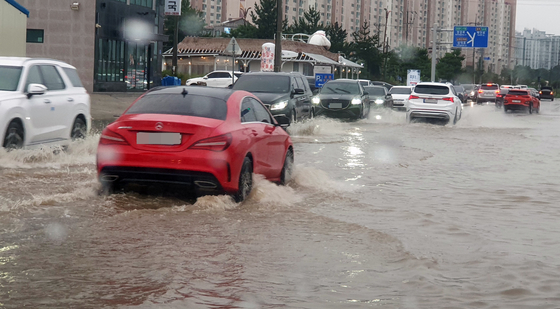 Cars drive through a flooded road in Gangneung, Gangwon, after heavy rainfall in Korea’s east coast Sunday due to the indirect influence of tropical storm Lupit. [YONHAP]


Heavy rainfall in Korea’s east coast Sunday due to the indirect influence of tropical storm Lupit brought more than 170 millimeters (6.7 inches) of precipitation in some parts of Gangwon, leading to flooded homes and roads, as well as stranded passengers.

Lupit, which originated as a typhoon south of China's Shantou in Guangdong Province, did not pass through the Korean Peninsula and traveled in a northeastward trajectory toward Japan, but resulted in heavy rain and strong winds in the east coast.

Heavy rain and strong wind advisories were issued in cities and counties across the east coast of Gangwon and North Gyeongsang due to the indirect influence of Lupit Sunday.

Firefighters rescued five passengers from an SUV that was trapped in a flooded underpass in Goseong County Sunday afternoon.

Flooding was reported at 26 houses, seven shops and one road in Sokcho, a popular summertime vacation spot, the Gangwon provincial government said.

Five roads were likewise flooded in Gangneung, another hot resort area, while an elementary school was hit by a mudslide.

As of Sunday afternoon, the region averaged up to 60 millimeters of rain per hour.

Authorities planned to carry out on-site inspections later Monday to determine the extent of the damage in Gangwon.

Heavy rain alerts were lifted Monday morning, but weather authorities forecast that precipitation could be expected in the Gangwon and Gyeongsang area through the night.

Also at around 10:00 p.m. Sunday, two fishermen sailing near the Sky Observatory in Yeongdo District of Busan found water levels had risen and sent a distress call to the Busan Coast Guard.

Busan faced strong winds that day, but the city’s weather authorities said Monday that the Busan area was out of the direct influence of Lupit as of Monday afternoon, lifting heavy rain and strong wind advisories issued the previous day.

The heavy rainfall over two days in the east coast comes amid a persisting heat wave in the Seoul metropolitan area.

Korea will feel Hinnamnor regardless of its path