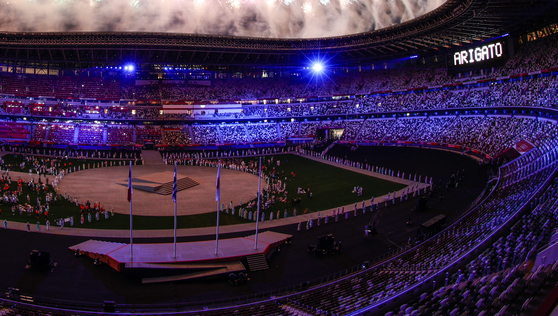 KANG KI-HEON
The author is an industry 1 team of the JoongAng Ilbo.

“The show must go on” is a track on Queen’s last album Innuendo released in 1991. Vocalist Freddie Mercury died of AIDS six weeks after the release. The song contains the last moment of Mercury squeezing out his voice. Guitarist Brian May advised Mercury not to exhaust himself, but he did not listen as if he had known it would be his last time recording. The song was played throughout the 2020 Tokyo Olympic stadium.

“Teo Torriatte” was played at the opening ceremony, a song from 1976 for Japanese fans. “Let us cling together as the years go by […] In the quiet of the night/ Let our candle always burn/ Let us never lose the lessons we have learned.” No song fits the first Olympics held during a pandemic better.

In fact, Queen is deeply associated with the Olympics. “We are the champions” has become inseparable music for the Olympic campaign since it was released in 1977. There is a story not widely known to the public. Freddie Mercury sang “Barcelona” with renowned soprano Montserrat Caballé in 1987, five years before the 1992 Barcelona Olympics. The song was selected as the official theme song in 1988, but it was later excluded as an official anthem as Mercury had died of AIDS.

The noisy and troublesome Tokyo Olympics ended on Sunday. The Games did not have audiences and athletes had to wear masks outside the stadiums. Special regulations followed. Athletes who tested positive and could not compete were not disqualified but were classified as not attending the competition. During the Olympic period, Japan’s Covid-19 case numbers broke records day after day.

The International Olympic Committee wrote that although people couldn’t be in the same place, the fact that we shared the same moment will be an unforgettable experience. The assessment for the first pandemic Olympics will come later. But I want to give a positive review on the athletes and their human will, as Mercury sang, “My make-up may be flaking but my smile still stays on.”

Stuck at an Olympic crossroads

The pandemic Olympics has begun (KOR)