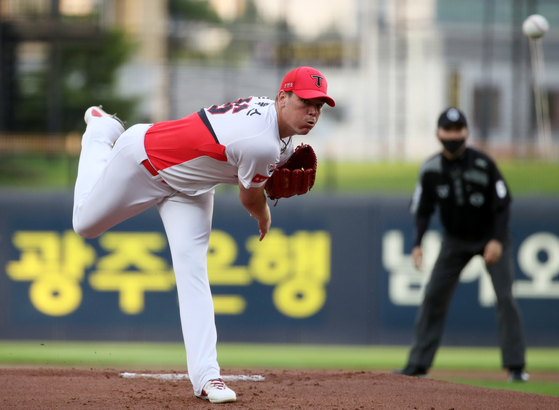 
The Kia Tigers announced Monday that pitcher Aaron Brooks has been released after the Korea Customs Service notified the club that traces of marijuana had been found in vape products the ace had ordered online.

According to the club, marijuana was detected in products ordered by the pitcher from the United States. Brooks was informed by customs on Sunday afternoon and is currently under investigation.

Brooks apologized for tarnishing the reputation of the club, saying that he is familiar with Korea's marijuana laws and he thought he had ordered a product that did not contain the drug.

Brooks joined the Kia Tigers last year, but had to cut his season short after his family were involved in a serious car accident in the United States. Brooks traveled back to be with his family with the full support of the club and the fans, rejoining the team this year on a renewed contract.

In 13 starts this season he has recorded three wins and five losses with a 3.35 ERA.

"We are very sorry that our player is being investigated even though we continue to educate them on our clean baseball goal and charter of ethics," the Tigers said in a statement. "We will proceed with clean baseball education and ethics education more thoroughly to prevent such incidents from occurring again."