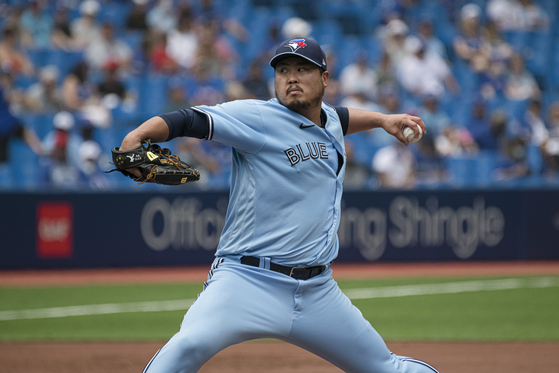 Toronto Blue Jays starting pitcher Ryu Hyun-jin throws to the Boston Red Sox during the second inning of a game on Sunday in Toronto. [AP/YONHAP]


Ryu Hyun-jin of the Toronto Blue Jays was lucky to walk away with a no decision after an uncharacteristically sloppy outing against the Boston Red Sox on Sunday.


Ryu gave up seven earned runs off 10 hits in three and two thirds innings on Sunday, striking out only one and allowing one walk. The Korean southpaw left the game with the Blue Jays down 7-2, but benefited from good run support in the later innings. The Blue Jays eventually edged out an 8-7 win over their Boston rivals.

The rough outing pushed Ryu's ERA up to 3.62 for the month, with the Korean ace having already allowed more runs in two games in August than in five games in July.

But a difficult day for Ryu was still a momentous one for the Blue Jays, providing another gripping win as the club adjust to playing in Toronto again after an extended exile during the height of the Covid-19 pandemic.

“It felt like a playoff game,” Blue Jays manager Charlie Montoyo was quoted as saying on MLB.com. “We kind of needed to win this game. And I don’t want to say needed, because every game counts... [but] if we take today, that’s three out of four against a good team. And to come back like this, it doesn’t get any better than this.”

Ryu wasn't the only Korean pitcher to pick up a no decision over the weekend. On Saturday, Kim Kwang-hyun of the St. Louis Cardinals pitched four innings in a 5-2 win over the Kansas City Royals, leaving the mound with the game tied at 2-2.

Kim, who has been on a run of good form over the past couple of months, gave up two runs on four hits with three strike outs and two walks in four innings of work.

Kim has won five of his last seven games with a 3.36 ERA for the season. The second-year major leaguer was on blistering form in July, winning four games and giving up just seven runs in 27 and two third innings for a 2.28 ERA for the month.

Elsewhere in the majors, Kim Ha-seong of the San Diego Padres is enjoying a run of good form, with three hits, three RBIs and a home run so far this month. Kim has a .333 batting average for August so far, a significant improvement on previous months.

Choi Ji-man of the Tampa Bay Rays is having a less impressive month. With only 16 at-bats across six games so far this month, Choi hasn't recorded a single hit.