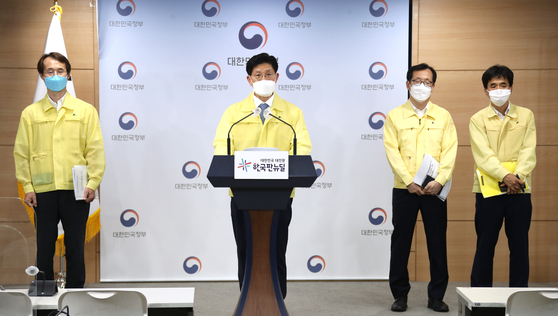 Land Minister Noh Hyeong-ouk, center, at the government complex in Seoul on Tuesday, announces measures against illegal multilayer construction practices. Nine people died after a building in Gwangju being dismantle fell on a bus in June. [YONHAP]

Construction companies could face heavy penalties, including punitive damages equal to 10 times actual damages and life sentences, if illegal use of subcontractors leads to a failure that causes harm or death.

The Ministry of Land, Infrastructure and Transport on Tuesday laid out measures to prevent tragedies caused by aggressive cost-cutting efforts.

Construction supervisors will now be responsible for managing subcontractors even in private projects. Until now, this was only required for public construction projects.

All companies involved in illegal subcontracting that results in a major accident will be held responsible, including the main contractor.

The government will rescind construction licenses if an illegal subcontract deal is detected twice in 10 years. At present, three infractions results in the canceling of the license.

When death occurs in cases where many layers of subcontractors are used, the license will be canceled with the first offense.

All companies that are involved in the illegal subcontracting will be prohibited from public-project bidding for two years.

Until now, they were only banned for a year.

The government is stepping up safety precautions for building demolition.

Excluding small structures — those smaller than three stories in height, 12 meters in length or 500 square meters in floor area -- plans have to be filed for the demolition of buildings

The demolition must be videotaped, and the supervisor must be on site overseeing the process. 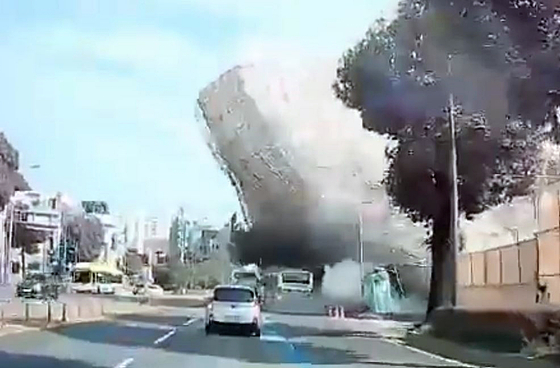 A video image on a vehicle dashboard captures the moment a building that is being dismantled collapsing on a passing bus in Gwangju on June 9. Due to the accident nine passenger on the bus were killed while eight were injured. [NEWS1]


In June, a building being demolished in Gwangju collapsed on a bus, killing nine.

The government on Monday blamed cost cutting and the many layers of subcontractors as the main causes of the disaster.

While HDC Hyundai Development was the main contractor of the redevelopment project in Gwangju, it gave the dismantling job to a medium-sized construction company, which in turn hired a smaller construction firm.

Through the illegal subcontracting scheme, the demolition costs were cut 84 percent.

According to the government in its recent inspection of demolition projects, it found 30 percent violating related regulations and 10 percent illegally subcontracting.

“The investigation committee found that there were frauds throughout the entire process from planning out the demolition, approval, the actual demolition and supervision,” said Land Minister Noh Hyeong-ouk while discussing the deadly Gwangju project.

You can’t subcontract this

You can’t subcontract this (KOR)