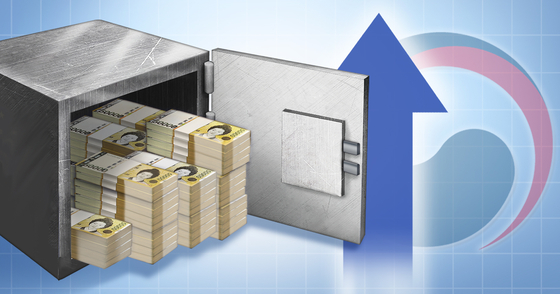 In the second half, companies may struggle with the extension of heightened social-distancing measures, which could affect total collections.

In addition to the tax revenue, the government also collected 20.5 trillion won of income from fund investments, taking the total to 298.6 trillion won, according to the Finance Ministry on Tuesday.

The income tax take was 60.3 trillion won, up 47.4 percent on year. That was 33 percent of the taxes collected.

Corporate taxes collected came to 39.7 trillion won, which is a 35.5 percent increase.

Value-added tax revenue came to 36.1 trillion won, which is a 16.5 percent increase.

In a statement, the Finance Ministry cited the rapid economic recovery and rising asset values, including real estate, as driving the increase in tax revenue in the first half.

In the first half, the government spent 345.8 trillion won, a 9 percent increase.

Because of Covid-related and social welfare spending, a fiscal deficit of 47.2 trillion won was recorded in the first half. A year earlier, the deficit was 90 trillion won.

The high number in 2020 was due to aggressive spending and a shortfall in taxes.

As of June, government debt totaled 898.1 trillion won, near the 900-trillion-won record.

The government has been trying to keep the debt from rising, financing the latest supplementary budget through revenue rather than debt.

“The positive cycle in favorable tax collection is contributing to the improvement in the fiscal deficit,” said Vice Finance Minister Ahn Do-geol.  “However, uncertainties are growing with the recent resurgence of Covid-19.”

He hinted that additional spending will be inevitable in the second half to minimize the impact of the pandemic.