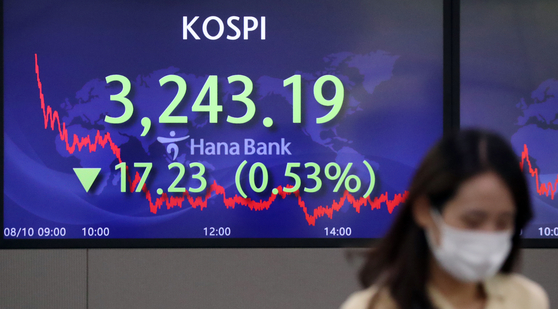 
Stocks retreated for the fourth straight session Tuesday, as concerns over the spread of the new coronavirus turned investors risk-averse. The won fell against the dollar.

Korea's daily new coronavirus cases bounced back to above 1,500 on Tuesday, as the nationwide resurgence of Covid-19 cases continued during the summer vacation season.

"Spreading cases of Delta variants raised oil prices and pulled down stock prices, while investors took to the sidelines ahead of the upcoming release of U.S. inflation data this week," Kiwoom Securities analyst Han ji-young said.

The U.S. consumer price index for July, set to be released Wednesday, is expected to be one of the key gauges on how the Fed will taper its accommodative policies.

KakaoBank tumbled 9.04 percent to 71,400 won on profit-taking on its third day of trading, but game developer Krafton gained 1.23 percent to 454,000 won on its stock market debut.

The local currency closed at 1,149.8 won to the dollar, up 5.5 won from the previous session's close.