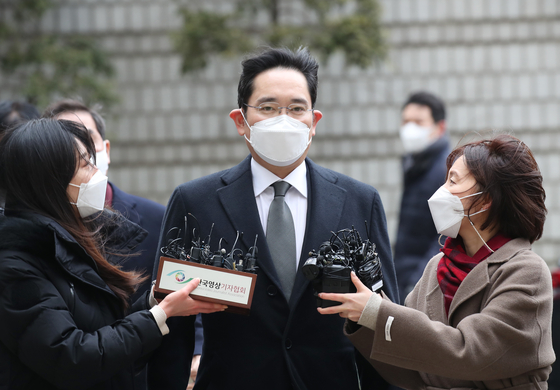 Lee Jae-yong is interviewed by reporters ahead of the verdict being read at the Seoul High Court in Seocho-dong, southern Seoul, on Jan. 18. [WOO SANG-JO]


Samsung Electronics Vice Chairman Lee Jae-yong will face hurdles resuming his role at the tech giant after getting out of jail on Friday -- like other jailed chaebol chiefs before him.

An employment restriction imposed on Lee by the Justice Ministry in February is considered the major hurdle. The order bars Lee from working at a public institution or any entity connected with his crime for five years.

The order is based on the Act on the Aggravated Punishment of Specific Economic Crimes, which stipulates that people convicted of embezzling more than 500 million won ($451,373) are prohibited from working at entities connected with the embezzlement.

Lee, who lost his Samsung Electronics board seat in late 2019, is serving a two and half year prison term for bribing former president Park Geun-hye. He is being paroled Friday.

The restriction will limit the scope of business activities including overseas business trip and a stint at the board of the electronics maker.

Still, exemptions are possible on the order of the Justice Minister, if Lee applies for an exemption.

Samsung Electronics declined to comment on whether Lee will file an application.

Justice Minister Park Beom-kye struck a cautious tone on Tuesday when asked if the ministry will hand down an exemption but said he has no plan to lift the legal restrictions.

Hanwha Chairman Kim Seung-yeon, for instance, retreated from leadership roles in 2014 after he came under the employment restriction rule. He was convicted of embezzlement and returned to management this year, after the bar was lifted.

SK Chairman Chey Tae-won continued a top management role after the Justice Ministry imposed restrictions in 2013. He was convicted of illegal trading and accounting fraud. SK claimed that Chey's role was permitted as he did not receive any compensation.

Lee has not received compensation from Samsung Electronics since 2017, when his first trial began.

First introduced in 1983, the restrictions have not always been strictly followed. To break from that tradition, the Moon Jae-in administration vowed to strengthen monitoring of enforcement of the law by launching a supervising committee in 2019.

Even under the Moon government, however, a series of exemptions have been made including one for Samyang Foods President Kim Jung-soo last year. She was convicted of embezzlement.

Korea’s business lobbying groups called for Moon to pardon Lee to avoid the restrictions, while civic groups say that any clemency for Lee is unjust.

Shares of Samsung Electronics declined after the parole announcement Monday, although many expected the news to be a boon for the stock.

Samsung shares fell 1.6 percent to close at 80,200 won on Tuesday, after closing flat the previous day.

Greg Roh, head of research at Hyundai Motor Securities, said the stock is more heavily affected by prospects in the semiconductor sector than news about Lee’s parole.

“The recent losses in Samsung Electronics stock are related to pricing issues for server dynamic random access memory (DRAM) chips,” he told the Korea JoongAng Daily.
“It is true that Lee’s return could brighten the prospects for investment and mergers and acquisition, but those expectations have not been directly priced into the stock,” Roh said.