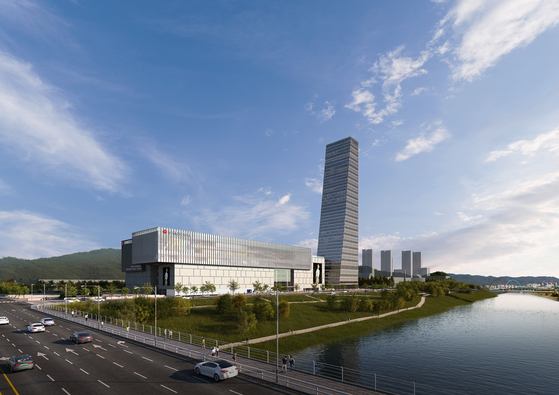 A view of the Shinsegae Department Store branch in Daejeon. It opens on Aug. 27. [SHINSEGAE DEPARTMENT STORE]


Shinsegae Department Store is opening its first new store in five years in Daejeon on Aug. 27. It is the 13th branch of the up-market department store.

Dubbed Daejeon Shinsegae Art & Science, the store has seven floors and a basement floor. It is connected to a 193-meter (633 feet) tower that includes a hotel and aquarium.

Shinseage will also rent out office space in the tower.

It will not feature the three major luxury fashion brands: Louis Vuitton, Chanel or Hermes.

Apart from shopping, the store offers a science-themed area that was developed with help from KAIST, Korea's premier engineering institute.

Shinsegae said it has 30 thermal AI cameras at the entrance of the building as part of its public health measures.

The cameras can check the body temperatures of 40 people every second.

Shinsegae’s new store “is expected to report between 10 billion won ($8.7 million) to 15 billion won in operating losses in each of the remaining quarters of this year,” said Park Jong-dae, an analyst at Hana Financial Investment. “Its goal is to generate 200 billion won in sales this year and 560 billion won once the business stabilizes.”

The company hopes to break even in three years, Park added.