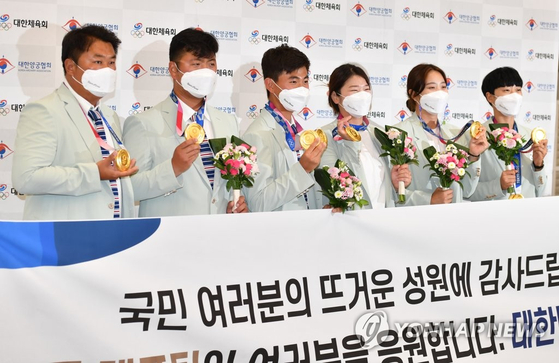 Korea’s national archery team after returning from Tokyo to Incheon on Aug. 1. [YONHAP]

On Tuesday, tvN entertainment show “You Quiz on the Block” announced that Team Korea archers Kang Chae-young, Kim Woo-jin, Kim Je-deok, An San, Oh Jin-hyek and Jang Min-hee will appear on the program, although the dates for filming and airing are undecided.

The archers are also set to appear on the SBS entertainment show “All the Butlers” on Aug. 22.

Broadcasters are striving to cast other Team Korea athletes on their shows. On Aug. 15, “All the Butlers” will have Korea’s national fencing team on the show. Male fencers have already appeared on KBS’s “Boss in the Mirror” and will appear on JTBC’s “Men on a Mission” and E Channel’s “Sporty Bro.”