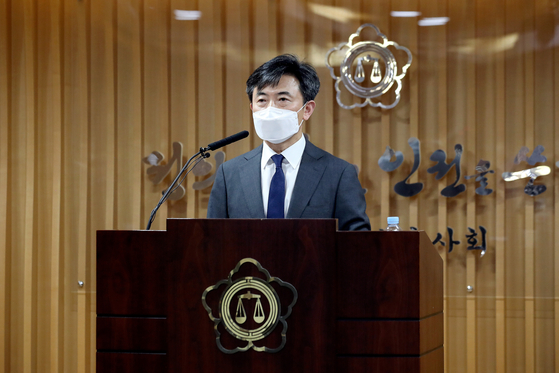 
A special investigative team that examined claims of evidence-tampering related to the 2014 sinking of the Sewol ferry announced Tuesday that there was no evidence to support the allegations.

At the press briefing in the Seoul Regional Lawyers' Hall in Seocho District, southern Seoul, prosecutor Lee Hyun-joo said the team decided not to pursue the case and would terminate its three-month-long probe after failing to find proof of a cover-up.

The Sewol ferry suddenly capsized in a strait off Jindo, South Jeolla, off the southwestern coast of the country while performing a starboard turn on April 16, 2014.

The sudden sinking took with it 304 victims, including 250 high school students and 11 teachers on a field trip to Jeju Island, in what became the country's deadliest ferry disaster since 1970.

Overloading and shoddy securing of the ship’s cargo, paired with maritime safety officials’ negligent oversight of the ship’s ballast load and poor crew training, were blamed for the sinking.

However, the disaster has been dogged by suspicions from many people — especially families of the victims — that the real causes of the sinking were buried in a conspiracy.

One of such allegations that the investigative team has examined since the probe began on May 13 is that data on the ship’s closed-circuit television (CCTV) may have been manipulated or deleted — a suspicion first suggested by the Special Commission on Investigations into Social Disasters in 2019.

Other suspicions addressed by the team include the circumstances in which the country's Navy and Marine police retrieved the ferry’s video recorder containing surveillance footage, and claims that then-President Park Geun-hye’s administration was involved in tampering with the footage in the process.

The commission raised the theory that the recorder could have been swapped with a different one to hide the real cause behind the sinking.

However, the special probe concluded that it would not be possible for someone to retrieve the recorder from the ferry as it sank and covertly change it with a different one containing alternate footage, and that there was no evidence to back up the claim.

The team also rejected the claim that the Blue House under President Park conducted criminal interference during the botched rescue operation.

The special probe is the ninth official investigation into various claims surrounding the sinking. Despite the lack of evidence to support a cover-up, victims’ families and supporting civic groups have repeatedly called for new investigations.

Lee’s team reviewed hundreds of documents and reports related to the disaster submitted by relevant official bodies, including the commission, the National Assembly and the Seoul Central District Court.

The team also seized documents and recordings from the state prosecution service, the Navy and the Korea Coast Guard, which was in charge of the rescue mission at the time, and requested that the National Forensic Service conduct digital forensic examinations on them to find if any tampering had occurred.

Lee said his team “did everything” it could to “uncover the truth” and said he hoped the probe results would help put the various suspicions to rest.

Sewol memorial unfinished due to disputes and resistance