Cheonghae unit likely infected at port near Gulf of Guinea

Cheonghae unit likely infected at port near Gulf of Guinea 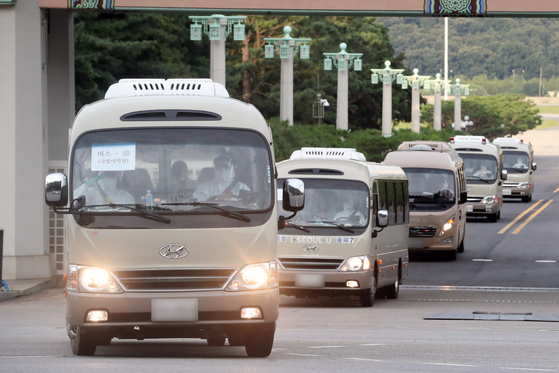 Buses carrying members of the Cheonghae unit leave an air base in Seongnam, Gyeonggi, on July 20. A total of 272 out of the 301-member unit on an anti-piracy mission off East Africa have tested positive for Covid-19. [NEWS1]


The massive Covid-19 outbreak on the Korean Navy’s Cheonghae unit destroyer may have started with a virus influx while docked at a port near the Gulf of Guinea in late June, authorities said Tuesday.

A joint team investigation composed of health authorities and military officials unveiled Tuesday the results of the epidemiological investigation conducted on infected members of the 34th contingent of the Cheonghae Unit.

A total of 272 crewmembers of the 301-member unit were infected with the coronavirus in July, after having left Korea earlier in February on a mission to fight piracy in waters off Africa near the Gulf of Aden.

The incidence is the biggest outbreak within a single military unit in Korea so far.

“We believe that the only time the virus could have infiltrated the unit was once the ship was docked at the port,” Park Young-joon, head of the epidemiological investigation team at the Korea Disease Control and Prevention Agency (KDCA) said.

Zone D, in which the Cheonghae Unit docked for four days from June 28 to July 1, is an area near the Gulf of Guinea in West Africa where they transported military supplies.

Authorities said they are weighing the possibility that members contracted the virus while docked in Zone D, considering that sailors showing symptoms of the virus soared after the Navy destroyer stayed in the area, and crewmen who had contact with an outsider or touched external supplies showed symptoms within five to seven days, which is the average latent period of the coronavirus.

Additionally, a genetic analysis discovered they were infected with the same strain of Covid-19 that was reported in the area.

The joint team cited that the crew had been kept close to each other in a compact environment, living and carrying out missions together for months, contributing to the high infection rate of the unit which stands at 90.4 percent of the total.

They added the spread of the more contagious Delta variant coupled with general fatigue from the extended period at sea being difficult to distinguish from an infection also accelerated the mass outbreak.

Health authorities said earlier last week that all infected members are presumed to have contracted the highly contagious Delta variant.

They randomly took 64 samples from the infected service members to test which variant strain they had contracted, and it turned out that all 64 tested positive for the Delta variant.

Given the close proximity of crew members on the vessel, authorities said all others are highly likely to be infected with the same strain.

All 301 members of the unit were swiftly transported home by plane on July 20, cutting short their missions in Africa, and were sent to military and civilian hospitals for Covid-19 treatment.

All of them have now fully recovered and have been released from their two-week quarantine as of Tuesday, authorities said.

This is the highest Covid-19 figure ever reported on a Monday.

There were nine more virus deaths, bringing the death toll to 2,134.