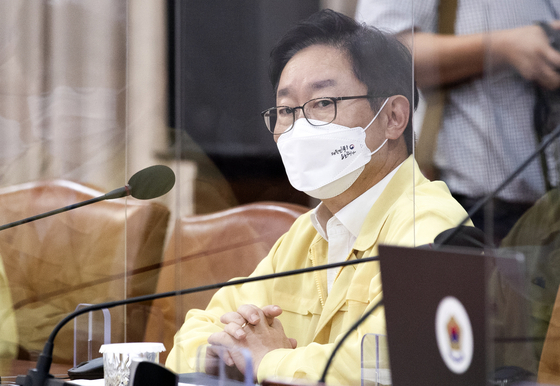 
Justice Minister Park Beom-kye said Tuesday that he has no plan to lift the legal restrictions that bar Samsung’s leader Lee Jae-yong from returning to helm of the nation’s largest conglomerate after he is released on parole this week.

“We made the decision according to the conditions set for parole under the law,” Park said Tuesday. “Lee cannot be an exception.”

A nine-member parole board on Monday reviewed applications of 1,057 prisoners and decided to include Lee among the 810 inmates to be released on parole on Friday. Minister Park subsequently approved the list.

Samsung Electronics Vice Chairman Lee is in jail for bribing former President Park Geun-hye during her presidency in return for political favors. As of the end of July, Lee completed 60 percent of his term, with less than 13 months left in a sentence of two and a half years.

“We’ve lowered the standard to allow more inmates to be released on parole,” Park said, adding that correctional facilities in Korea are 110 percent filled.

“Not many countries have such overpopulated jails,” he said, stressing that “the decision to release prisoners on parole was not for Lee alone.”

Park also said he has never considered lifting the employment restrictions imposed on Lee, though he did say on Monday that the decision to release the tycoon was for the sake of Korea’s economy.

“I have not considered lifting employment restrictions on Lee,” Park said Tuesday. “We took into account the Sovereign Credit Rating and more when we made the decision to release him on parole. Participating in the management and working for [Samsung] are a separate issue.”

Under the law governing special economic crimes, the Ministry of Justice imposed a five-year employment restriction on Lee in February, after his sentence was finalized in January.

The justice minister does, however, have the power to lift those restrictions.

Park also dismissed any speculation of him having consulted with President Moon Jae-in about the decision. “Parole is granted under the system of the Justice Ministry, and I am the final decision-maker,” Park said.

After Park decided to release Lee on parole, patrons of the Moon administration fiercely criticized the decision. Some ruling Democratic Party (DP) lawmakers such as Reps. Jung Chung-rae and Park Yong-jin said it is a shame that the Moon government granted parole to the tycoon.

Liberal civic groups such as People's Solidarity for Participatory Democracy, Citizens' Coalition for Economic Justice and Lawyers for a Democratic Society also protested the decision.

A group of liberal civic groups also held a press conference on Tuesday to condemn the Moon administration for releasing Lee on parole, while also applying for a detention warrant on KCTU leader Yang Kyung-soo on charges of holding an illegal rally last month.

“The Justice Ministry decided to release Lee on parole, and we will see how the decision will improve this unfair society where laborers are struggling painfully and if the law will be equally applied to Yang in the future,” said Kim Jae-ha, head of the Korea Alliance for Progressive Movement.