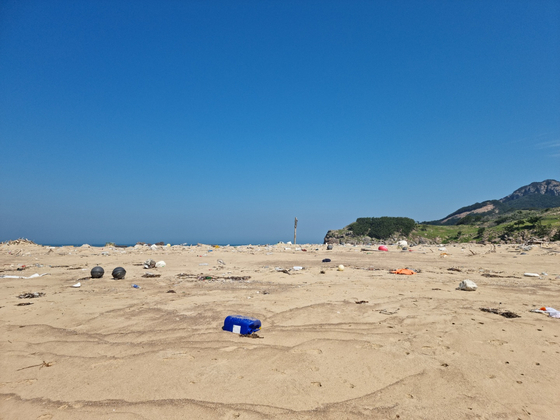 
Three hours southwest of Incheon Port, between the azure sky and the pristine ocean, stretches an emerald woodland called Guleop Island, one of 41 islands of the Deokjeok archipelago.

Guleop Island's name is derived from its shape which resembles a person lying on their belly. The world "guleop" in Chinese characters refers to clammers working face-down in tidal flats.

With its original landscape mostly preserved, Guleop Island is said to be the Galápagos Islands of Korea.

The isolated island's hills serve as home to various wildlife, including some rare species of plants, deer and falcons. It is also a unique destination for backpackers.

However, these days, Guleop Island has found itself having to deal with all the waste from the ocean that flows onto its shores.

Mokkimi Beach, just 15 minutes away from Guleop Island's dock, was sordid with all sorts of marine litter. Scattered pieces of Styrofoam, liquor bottles, PET bottles and even engine oil containers could easily be spotted along the coast.

On top of that, it is near impossible to walk barefoot because of the tangled nets and other abandoned or lost fishing gear. The shores seem to have become a sort of waste yard for sea junk.

Residents say that their efforts alone are not enough to handle the massive influx of garbage. They agreed that the speed of waste accumulation on the shore far exceeds that of cleanup.

"When the tide goes out, the sandy beach is full of garbage," said Choi Seon-yeop, the village head of Guleop Island. "I drive out in my cultivator every day to pick up the garbage myself, but I do have limits."

A large portion of of the garbage is plastic, which also poses an issue. Plastic aggravates the marine environment and can also negatively affect humans as the toxins climb up the food chain.

These ships collect waste by lowering a sort of conveyor belt designed to catch floating debris into the waters.

The rate of Incheon SeaClean's waste pickup has been rising every year since its first operation in 2018, according to the Incheon Metropolitan Government.

The Ministry of Oceans and Fisheries has also taken action to ameliorate the current conditions on the island's shores. While continuing to support the local government's efforts, the ministry outlined plans to increase marine cleanup ships and on-site marine environmental guards.

"With state funding, we are constructing seven additional cleanup ships. We also intend to employee 300 additional marine environmental guards," a ministry official said. "We are trying to find the best possible solution within the budget."

To ultimately decrease the amount of marine debris, experts emphasize the need to prevent the actual inflow of waste, rather than to just focus on pickup.

"The issue of marine debris is much too complex for a local government alone to solve," said Hong Su-yeol of Resource Recycle Consulting.

"The local government, the Ministry of Oceans and Fisheries and the Ministry of Environment should chew over related policies and matters such as the installation of sea barriers to block the wastes from floating into the shores."

Guleop Island has an area of 420 acres and a coastline length of 8 miles. Mount Deokmul, Mount Yeongpyeong and Gaemeori Hill are some of the island's attractions.

In 1994, the government designated the island as a radioactive waste disposal site, drawing public attention to the island. But when they discovered that the ground on the island was an active fault where earthquakes could occur, the designation was cancelled.

In 2006, the island made the headlines again when CJ Group — a South Korean conglomerate with various subsidiaries in food, logistics and pharmaceuticals — bought 98.5 percent of the island from Ongjin County, Incheon, and announced its plan to build a tourist complex.

However, environmental groups strongly opposed construction of golf courses in the area, and the project was canceled.