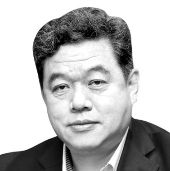 Kang Joo-an
The author is an editorial writer of the JoongAng Ilbo.

“Humanity has but three great enemies, fever, famine, and war; of these by far the greatest, by far the most terrible is fever,” said Canadian physician William Olser in his address to the American Medical Association in 1896.

Olser’s warning of the threat of fever in varied forms came 22 years before the Spanish flu swept the world in 1918. Experts are still marveled by his precise insight into the difference of devastation between war and the infectious disease. Prophesies often draw attention during times of insecurity. They gain credence if they come from someone with power and access to information.

President Moon Jae-in last week declared that Korea will be in the ranks of global top five in vaccine production by 2025. During the first meeting of a committee devoted to promoting the country as a global hub for vaccines, the government said it would spend 2.2 trillion won ($1.9 billion) over the next five years to achieve the goal and bring the day when vaccines will no longer be a worry. Yet the comments were ignored at home.

“It could be a shortcut to fasten the return to normal lives if we could end this (fourth wave) in a short yet full-scale manner,” said Moon as the government enforced Level 4 distancing rules in the capital region four weeks ago. His prediction missed by far. The daily count has been only building up to close 2,000. On the following day, Jeong Eun-kyeong, commissioner of the Korea Disease Control and Prevention Agency (KDCA), gave a different forecast. She projected the infection outbreak will increase to 2,331 by mid-August, citing mathematical modeling by experts. The mixed picture confused people. 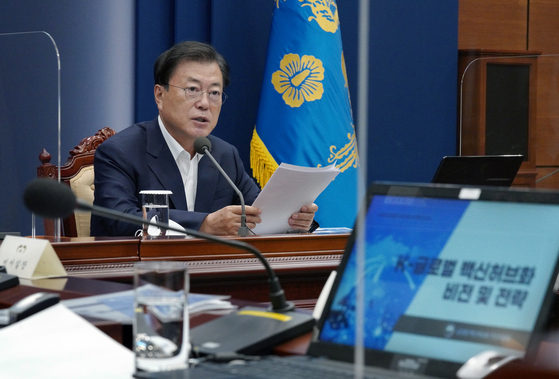 In a Blue House meeting Thursday, President Moon Jae-in declares that Korea will be among top five global vaccine producers by 2025. [BLUE HOUSE]

Since the president is not an expert, someone may have fed wrong ideas to him.

We are deeply worried about who really guided the president to have futile hopes in the battle against the virus and what role the person still plays in government.

Prime Minister Kim Boo-kyum on July 14 apologized for the breakdown in the e-booking system for vaccines and assured that vaccine program will pan out as planned since vaccines were sufficiently in stock. But the system crashed soon afterwards, forcing the president to order related government offices to seek help from the private sector. The prime minister’s command over the disaster affairs headquarters is pitiful. The booking for people under 40s starting this week will be critical.

President Moon declared that the Covid-19 crisis would soon come to an end. That was 18 months ago. The president’s judgment on the Covid-19 should have been examined at that time. Myongji Hospital Chairman Lee Wang-jun immediately disagreed and predicted the crisis would be drawn out to next year. Lee is on the vaccine hub committee.

If the government or president had paid heed to the warning at the time, Moon would have been saved from the embarrassing streak of bad predictions.

Chairman Lee predicts the daily count could reach 3,500 to 4,000. He insists that the vaccine response paradigm must change as the Delta variant and other factors undermine the current system. “Since a vaccine is the sole game-changer, vaccination must become top priority in fighting with the virus” while keeping the daily count simply as a reference figure, he argued. He suggests changes according to the vaccination progress to raise the vaccination rate.

Various alternatives are being proposed amid a breakdown on the self-employed front and protracted destabilization in everyday lives. Kang Min-gu — a senior judge at the Seoul High Court who has been sharing Covid-19 developments from analysis of foreign coverage on social media — proposes to change the reference of “confirmed cases” to “the infected or the people who tested positive” as used in Japan and Taiwan. Former Jeju Governor Won Hee-ryong held a single-person protest at Myeong-dong — the downtown shopping district which has turned into a ghost town due to empty shops — demands an end to the state-enforced curfew and restrictions such as the banning of private gatherings of more than two from 6 p.m. A former senior government official mentioned that many in the government agree to the need for changes in the mitigation policy but cannot easily propose it.

“The greater the ignorance, the greater the dogmatism,” said Olser. The great physician who is still revered after centuries forecast the danger of dogmatism in the war against virus. All possible wisdom must be mustered in the face of an unprecedented crisis. We cannot expect the government to win this battle if it shuns any experts for making the opposite prediction or having worked for the past government.