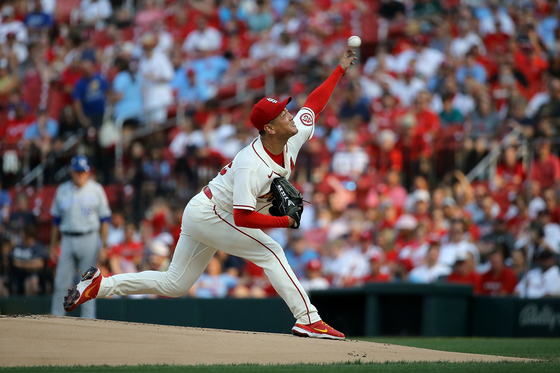 Kim Kwang-hyun of the St. Louis Cardinals throws during the first inning against the Kansas City Royals at Busch Stadium in St. Louis, Missouri on Saturday. [AFP/YONHAP]


The St. Louis Cardinals put pitcher Kim Kwang-hyun on the 10-day injured list (IL) Monday with elbow inflammation, his third stretch out of action this season.

Kim's elbow has reportedly been bothering him for a few weeks. He had an extended rest between two starts last week, sitting out of the rotation for nine days before returning to pitch four innings in a 5-2 win over the Kansas City Royals on Saturday. Kim's elbow was obviously still an issue over the 83-pitch outing and he was placed on the IL two days later.

The Cardinals have not announced any details about Kim's injury or how long he is expected to be out for.

The Korean southpaw struggled with injury earlier in the season. Back ailments delayed his start to the season and then forced him to miss a start with a brief stint on the IL in June. Since then, he has been on very strong form.

Kim has won five of his last seven games with a 3.36 ERA for the season. The second-year major leaguer threw up particularly impressive numbers in July, winning four games and giving up just seven runs in 27 and two third innings for a 2.28 ERA for the month.

Kim is in the final year of a two-year contract with the Cardinals. Injury worries aside, the Korean pitcher has likely done enough this season to ensure that his contract is either renewed or snapped up by another club. His MLB career ERA is 2.84 after 26 starts, seven in last year's shortened season and 19 so far this year.

Kim swaps places with Cardinals' right-hander Daniel Ponce de Leon, who was activated off of the 10-day IL after a lengthy absence with his second shoulder injury of the season. Ponce de Leon is expected to work in the bullpen as he continues his recovery.