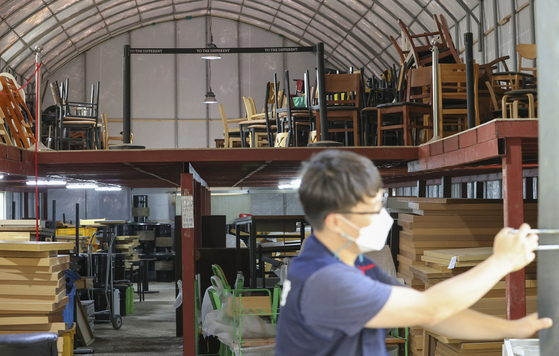 The inside of a store in Ansan, Gyeonggi that sells second-hand items from shuttered restaurants on Aug. 10. According to Statistics Korea, number of people with jobs continued to grow in July. However, due to the worsening pandemic, service companies are laying off employees. [YONHAP]

A total of 27.6 million people were employed in July, up 2 percent on year, the fifth consecutive month in which the number of jobs rose and the fourth month in a row in which gains were above 500,000.

“Despite the difficult situation, including raising the social distancing to Level 4 in the greater Seoul area, we were able to achieve an increase of more than 500,000 jobs for four consecutive months,” Finance Minister Hong Nam-ki said.

He added that total employment is 99.4 percent of the level in February 2020, before the pandemic started taking its toll.

Unemployment rose to as high as 5.4 percent during the pandemic, hitting that number in January.

By category, the number of jobs in health and social welfare, which are heavily funded by the government, increased 237,000 in July, up 9.9 percent.

“It shows again that the government job programs are becoming a solid safety net amid a job market affected by the fourth Covid-19 wave,” Hong said. 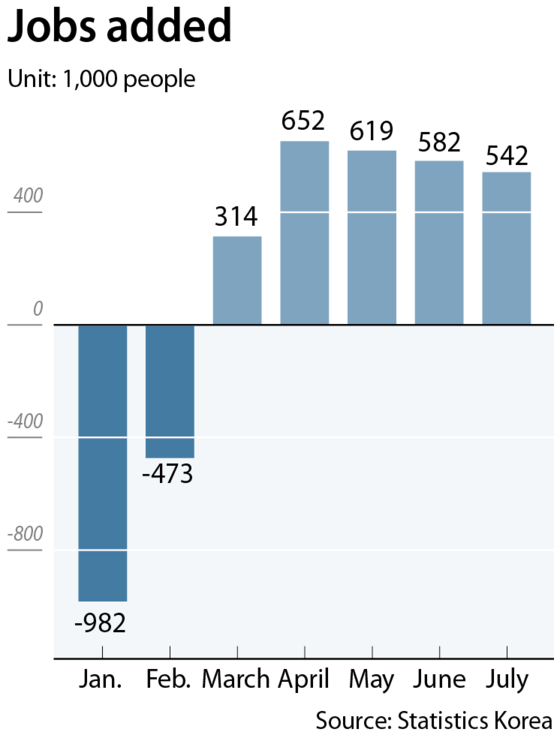 Manufacturing, which employs 15.7 percent of all of those with jobs, added 6,000 positions compared to the year-earlier period, a 0.1 percent increase on year.

The number of jobs in restaurants and at hotels fell by 12,000 or 0.6 percent — the first decline in four months — while employment at wholesale and retail businesses fell by 186,000, a 5.3 percent decline.

Gains in employment were reported in IT, logistics and storage.

The only age group in which employment declined was the 30s cohort. In July, 122,000 fewer people in their 30s had jobs. That’s a 2.3 percent fall and the 17th consecutive monthly decline.

Hong expressed concern about the impact of the fourth wave of the pandemic on employment in the second half.

“The recent strengthening of quarantine efforts will likely to show up in employment starting August,” Hong said.