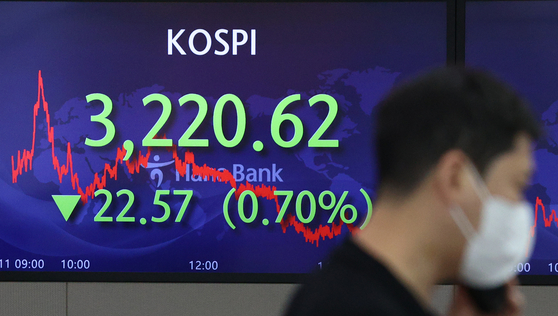 A screen in Hana Bank's trading room in central Seoul shows the Kospi closing at 3,220.62 points on Tuesday, down 22.57 points, or 0.7 percent, from the previous trading day. [NEWS1]


Stocks fell for the fifth consecutive session Wednesday as a record-high number of Covid-19 cases dented investor sentiment. The won fell against the dollar.

The key index got off to a weak start as the country reported a record number of daily coronavirus cases at 2,223.

Daily coronavirus cases have recently been on the rise, remaining above 1,000 for over a month, despite the implementation of the strictest social-distancing measures in the capital area.

Market researcher TrendForce said in a report Tuesday that personal computer DRAM prices are forecast to fall by up to 5 percent on-quarter in the final quarter of the year due to PC manufacturers' high inventory.

The forecast weighed on semiconductor-related shares overnight on Wall Street and took a toll on local chip stocks, according to analysts.

The local currency closed at 1,156.4 won to the dollar, up 6.6 won from the previous session's close.

Stocks rise after good export report and despite DRAM decline