Chanel's adoring customers in Korea have been disappointed at its handling of a leak of their personal data.

The luxury brand was tardy in informing of them of the cyberattack, and the announcement on its website was in a miniscule font.
Personal information of some customers from its membership database for the Fragrance and Beauty division was leaked on Aug. 5.

Chanel Korea alerted the public to the cyberattack on its website two days following the hacking.

On the website, it wrote that it confirmed a “personal data leak of some customers on [Aug.] 6.”

Chanel Korea apologized, but did not give a reason for the delay in announcing the cyberattack, but said that it “individually informed consumers and noticed the situation within 24 hours, as in the government guideline.” 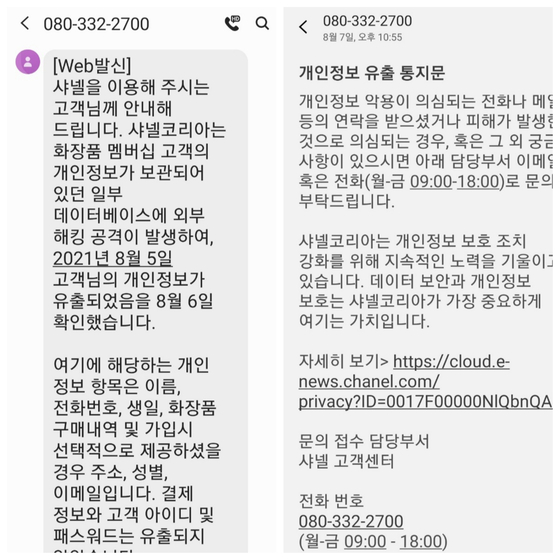 
Chanel aficionados said they expected more from the company, some meaning that materially.

“I wasn’t happy that specific compensation measures were not announced following the leak of data from its customers,” said a 26-year-old graduate student surnamed Cho.

“Personal data leakage is a serious issue," said another 30-year-old Chanel customer, "but [Chanel Korea] seems to have begrudgingly uploaded an apology.”

Chanel customer service should be a lot better considering the prices it charges, fans said, and the long lines fans wait in to get into stores.

Chanel Korea “values its products so highly but seems to be thinking lightly of customer data,” wrote a commentator online.

Since the pandemic Chanel Korea raised its prices between 3 to 5 percent.

The selling price of a medium-sized classic Flap Channel bag in department stores jumped more than 50 percent from 5.98 million won in 2017 to 9.71 million won in July.

Some analysts say the data leak could damage the brand image of Chanel Korea.

“Luxury is not defined by the product itself but various factors are considered comprehensively to create the brand value, including service and after service,” said Lee Eun-hee, a professor who teaches consumer science at Inha University. “Strict measures are necessary as data leakage could result in crimes like voice phishing or robbery.”

Chanel Korea said the "incident is being thoroughly investigated by Chanel's IT team and relevant government authorities."