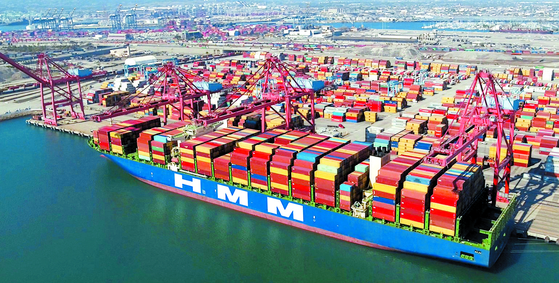 An HMM’s container vessel docked at the Port of Los Angeles in October last year. [YONHAP]


The possibility of a strike at HMM has increased as one of its unions failed to support a wage proposal from management.

The union, which is asking for a 25 percent raise for workers on ships, plans to file for mediation by the National Labor Relations Commission (NLRC).

The labor union for crews on ships held a fourth round of negotiations with management on Wednesday.

“The company is not even showing the least bit of sincerity to its employees who have shared the company’s pain for a long time,” said Jeon Jeong-geun, a spokesperson for the union told Chosun Biz.

Jeon added that “it is like telling us to go on a strike” if the company does not make an improved proposal during the negotiation.

The union representing employees working in offices and other locations filed for mediation with the NLRC.

No progress has been made so far.

The unions argue that a 25 percent rise is necessary after wages were frozen 2012 through 2019.

If labor and management fail to agree, unions could file to the NLRC to go on a strike.

The strike could further disrupt exports that have been negatively affected by the global shortage of shipping containers, primarily caused by the Covid-19 pandemic.

The company eventually agreed to a 2.8 percent increase.

HMM is scheduled to report second-quarter earnings later this week.