Naver taking 15 percent of Cafe24 in a stock-swap agreement

Naver taking 15 percent of Cafe24 in a stock-swap agreement 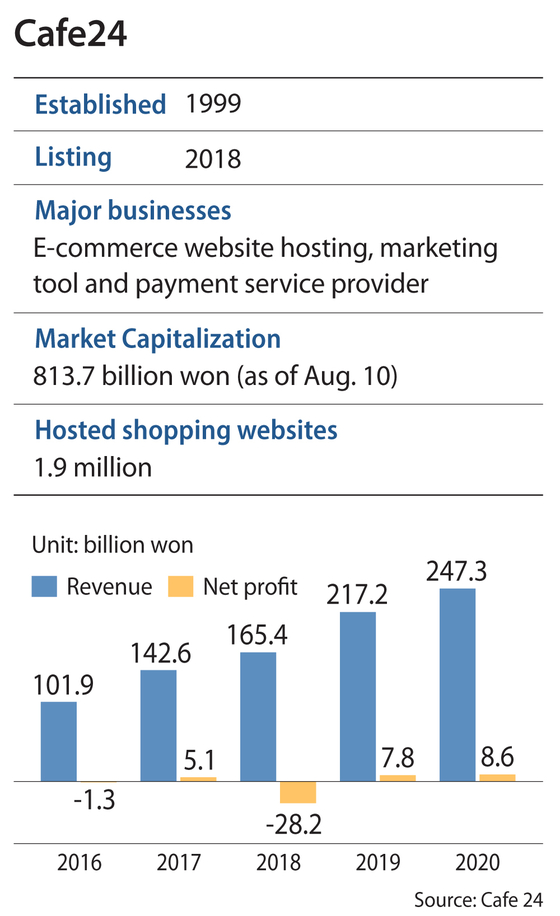 Naver has signed another share-swap agreement, this time with a company that makes e-commerce websites and provides related tools and services.

Following the transaction, Naver will be the second largest shareholder of Cafe24, with a group of key executives together controlling 30.01 percent.

Naver has executed similar deals over the past year with retail and delivery companies as it stitches together a web of alliances that could help it defend its dominance in Korea’s e-commerce market and expand globally.

“The partnership with Cafe24 and Naver will provide momentum for small- and mid- sized businesses to grow and serve as a stepping stone for global expansion,” Naver CEO Han Seong-sook said.

Kosdaq-listed Cafe24 designs shopping websites for retailers and provides them with value-added services and solutions, including hosting, optimization, advertising and domain registration. It claims a 63-percent market share in this business in Korea and counts Imvely, Mixxmix and Stylenanda among its clients.

Since being established in 1999, it has hosted 1.9 million websites.

Naver operates the Smart Store — an online shopping platform for small businesses — in Korea, but Cafe24 has been hosting e-commerce websites in a number of other Asian countries, from Japan to Vietnam.

Naver will introduce its Smart Store platform in Japan later this year through Z Holdings, a joint venture between its Line subsidiary and Softbank’s Yahoo Japan. After Japan, Southeast Asian countries such as Taiwan and Thailand are its next stops.

“We will expand our partnership with Cafe24, forming a fulfillment alliance and partnering to utilize artificial intelligence (AI) and cloud computing technologies,” said a spokesperson for Naver.

“Cafe24 is a Korean version of Shopify in the U.S.,” said Jung Yoon-seun, a business professor at Dankook University. “Providing business solutions for sellers is very much aligned with Naver’s strategy, and the companies will achieve great synergy in global markets.”

“Online businesses will be able to get access to more e-commerce value chain services,” said Lee Jae-suk, CEO of Cafe24. “We’ll develop our business into a platform that allows sellers to succeed using their creativity.”

With more services to be added, Cafe24 expects the range of its customer base to expand. Its sellers are concentrated in the fashion industry, with more than half of its hosted websites being fashion and cosmetic retailers as of last year.

Naver swapped shares with Emart early this year and with CJ Logistics late last year. It is investing in Logiall, a delivery company, next month, and invested 20-billion-won ($17 million) in Brandi, a fashion e-commerce company, on Aug. 4.

The company will allow users to shop for Emart food and groceries via Naver starting in the fourth quarter, and said that it is working with CJ Logistics to offer same-day delivery to Smart Store customers.

Cafe24 shares rose 3.96 percent on Wednesday and are up almost 40 percent in a month. Naver fell 0.34 percent Wednesday.