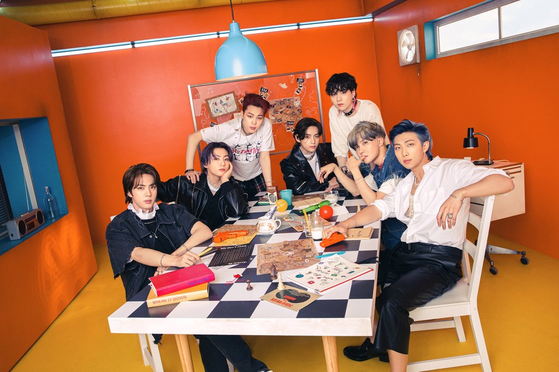 
BTS’s latest English single “Permission to Dance” ranked No. 27 on Billboard’s Hot 100 chart in the fourth week since its release.

Released on July 9, the single dropped 18 spots compared to last week when it ranked at No. 9.

The single initially debuted at No. 1 on the chart, casting aside the band’s other English single “Butter,” which fell to No. 7 during that week.

"Butter" regained the top spot in following weeks but “Permission to Dance” remained within the Top 10.

The song went viral again when Elton John joined in the band’s “Permission to Dance” challenge on his YouTube channel and Twitter. In the video John dances along to the song before saying, “Thanks BTS, love to the ARMY.”

The singer’s participation in the challenge is attributed to the mention of his name in the song, “When it all seems like it’s wrong, just sing along to Elton John.”

The challenge kicked off with the release of the song and was promoted by the band members themselves who encouraged fans to choreograph their own moves and share videos of themselves on various social media platforms.

Meanwhile, “Butter” fell to No. 4 on the Hot 100 charts after taking the top spot for nine weeks. This week’s No. 1 was claimed by “Stay,” a collaboration between Australian rapper The Kid Laroi and Canadian singer Justin Bieber.