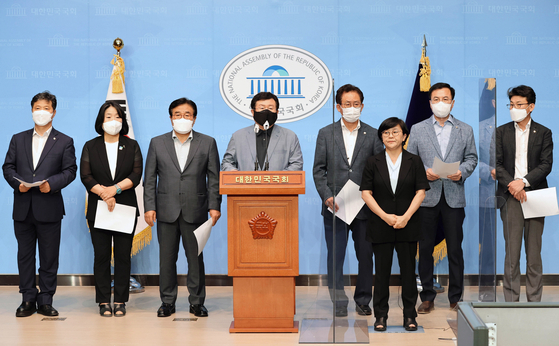 A group of 74 liberal lawmakers issued a joint statement on Aug. 5 calling for South Korea and the United States to postpone an annual summertime military exercise, announced in a press briefing by Democratic Party Rep. Sul Hoon, center. [LIM HYUN-DONG]


Former four-star generals that served as commanders of the U.S. Forces Korea (USFK) were more disturbed by South Korean liberal lawmakers’ calls to postpone the Seoul-Washington summertime military exercise than squawking by Pyongyang.

James Thurman, chief of the USFK from 2011 to 2013, told the Voice of America (VOA) Wednesday, “I think the ROK [Republic of Korea] needs to maintain readiness and always be prepared to defend its borders.”

On North Korea’s bellicose statements on the joint military drills between South Korea and the United States, Thurman said, “Frankly, I do not worry about their rhetoric… We have heard it before.”

Kim Yo-jong, the North Korean leader’s sister, released a statement on Aug. 1 demanding Seoul and Washington cancel their summertime joint military drill schedule, warning that it could cast a cloud over inter-Korean relations. She released a second bellicose statement calling for the withdrawal of U.S. troops from Korea Tuesday, coinciding with the start of a preliminary training exercise ahead of next week’s computer-simulated combined command post exercise, which have been scaled back due to the coronavirus pandemic.

In a joint statement last Thursday, a group of 74 liberal lawmakers led by the ruling Democratic Party (DP) called for South Korea and the United States to postpone the exercise scheduled to kick off next Monday. The statement described the drill as an “obstacle in bringing North Korea to the negotiation table, regardless of its scale.”

The DP leadership, however, has called the upcoming joint drill “inevitable,” stressing it was too late to postpone the exercise.

Some South Korean government officials, including the chief of the National Intelligence Service and unification minister, have also favored delaying the drill.

Retired Gen. Burwell Bell told the VOA, “Military readiness of the alliance to effectively deter and if necessary defeat North Korea — and potentially China should it enter any future conflict on the Korean Peninsula — is not something that should be treated as a political tool to attempt to achieve potential short term enhancements to relations with North Korea.”

“Weakness and unequal conciliation will only embolden both China and North Korea to fracture our great alliance and leave South Korea alone to face a future under North Korean rule,” said Bell, who served as commander of the USFK, Combined Forces Command and UN Command from 2006 to 2008.

His remarks reflected worries over the politicization of Seoul-Washington joint drills and a concern that such actions could send a bad signal to China and cause a further rift in the South Korea-U.S. alliance.

Bell said South Korea and the United States need to “take steps to bolster [their] military readiness” taking into consideration “shortfalls in alliance readiness” due to the Donald Trump administration and the Covid-19 pandemic.

He added that the upcoming computer-simulated military command post exercise “is crucial at this point in time to achieve higher readiness and send a strong message of alliance solidarity to North Korea and China.”

John Tilelli, who served as USFK commander from 1996 to 1999, said that the computer-simulated command post exercises have been effective in training commanders and staff but stressed “it is key that all levels of command keep their service members trained in their war-fighting skills.”

In response to Kim Yo-jong’s latest statement, U.S. State Department spokesperson Ned Price said Wednesday that the United States “harbors no hostile intent towards the DPRK,” referring to the acronym for the North's full name, the Democratic People's Republic of Korea.

Washington remains "committed to the security of the Republic of Korea and our combined defense posture in accordance with our ironclad U.S.-ROK alliance,” he said, adding that the joint military drill is “purely defensive in nature.”

Price continued, “We support inter-Korean engagement, and we’ll continue to work with our ROK partners towards that end.”