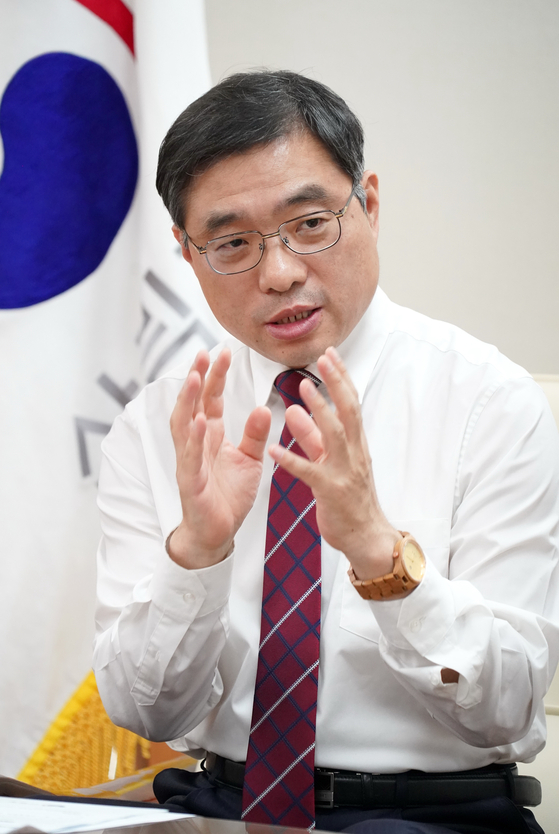 Some call it the Olympics of forestry, said Choi Byeong-am, minister of the Korea Forest Service, speaking of the World Forestry Congress that Korea will host with the United Nations in Seoul next year.

“The World Forestry Congress is the largest and most influential international conference in the field of forestry and is also called the Forest Olympics, as it is a place where many interested individuals and stakeholders in forestry and environmental fields such as governments, international organizations, civic groups, academia and corporations around the world participate and share their opinions and experiences,” Choi said.

The Korea Forest Service, together with the UN Food and Agriculture Organization (FAO), is hosting the international forum from May 2 to 6 in 2022 at Coex in southern Seoul.

The conference, held every six years, was last held in South Africa in 2015. The congress in Seoul was scheduled for 2021 but postponed due to the Covid-19 pandemic.

Themed “Building a Green, Healthy and Resilient Future with Forests,” the conference will pose questions about how to turn the world greener in the midst of a pandemic.

“It is time to ask ourselves what role forests can play in this time and age of climate change and a pandemic,” Choi said. “One aspect that the Korea Forest Service has been focusing on is assistance to reforestation efforts and forest management efforts in developing nations, and this is something we’ll discuss in-depth at the conference.”

At the UN Climate Change Conference of the Parties in 2015, 196 parties signed an agreement to reduce greenhouse gas emissions and limit global warming to below 2 degrees Celsius (3.6 degrees Fahrenheit) and preferably to 1.5 degrees over pre-industrial levels.

“We have been working with Cambodia since 2015 to support local farming communities in Kampong Thom Province, because a lot of the deforestation there actually took place as communities tried to expand their farmlands,” Choi said. 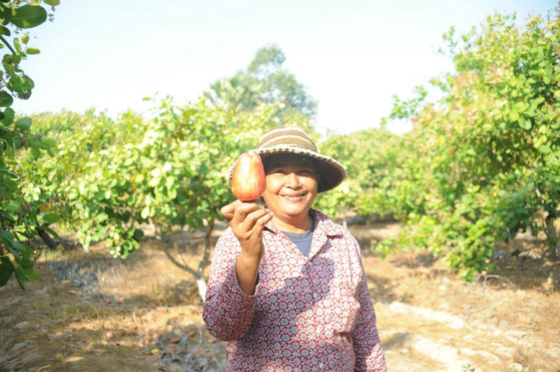 A local in Cambodia holding up a cashew apple accessory fruit, after cashew trees were planted to help reforest an area of a farming community. [KOREA FOREST SERVICE]

The projects have paid off, with a reduction of at least 650,000 metric tons of carbon emissions from the region as of September last year, according to the Korea Forest Service.

Although Korea’s reduction of greenhouse gas emissions abroad does not factor into its NDC target as of now, Korea and a number of countries are hoping to change that at the upcoming UN climate change conference in Glasgow, Scotland, in November.

In the lead up to the conferences in Glasgow and Seoul, the Korea JoongAng Daily spoke with Choi to hear more about Korea’s forestry policies and how it hopes to apply them at home and abroad in the coming years.


Q. First of all, why was Korea chosen as the site to host the World Forestry Congress?

A. The World Forestry Congress dates back to 1926, when it was first held in Rome, Italy. Since then, it’s been held across the continents, but only two Asian countries have hosted it thus far: India did in 1954, and Indonesia in 1978.

Korea was recognized by the FAO in 1982 as the only developing nation at the time to have succeeded in reforestation since World War II. It was a result of the Korean government prioritizing reforestation, whose policies were shared horizontally among government bureaus and implemented vertically with the central and local governments all taking part. As a result, from 1973 to 1978, Korea was able to reforest an area of 1.08 million hectares (nearly the size of 2.7 million football fields). These are just some of our experiences that we are hoping to share at the congress.


Every country has different topographic characteristics. How has Korea been able to partner with other countries on sharing its forestry experiences, and how has it accounted for the differences in environments?

Korea has been working with a number of developing countries to fight desertification, and one of our major programs, called the Changwon Initiative, has been running since 2012 through the UN Convention to Combat Desertification. We’ve contributed $3.88 million to fight desertification across 16 nations including Tunisia, Ghana, Morocco, Ethiopia, Togo, Niger, Kyrgyzstan, Tajikistan, Mongolia, Ecuador and Peru.

Such programs have been adapted to fit the topographic characteristics and needs of each location. For instance, in Laos we have been running since 2016 community-based projects to help the locals regain their green spaces, which has been coordinated through Asian Forest Cooperation Organization, an intergovernmental body created by Korea’s suggestion at the Korea-Asean summit in 2009. Here we are sharing our best practices on how Korea was able to implement its reforestation policies on the local government and local community levels.

In another instance, Korea has been working closely with Mongolia on its forestation efforts for years — we have forested some 3,064 hectares of land in Mongolia from 2007 to 2017. Through 2022, we are building together some 40 hectares of forest within Ulaanbaatar, where people can rest under the shades of green. Trees that endure the dry and cold climate of Mongolia were selected. From 2022 to 2026, we are looking to implement an $8 million project to reforest northern areas of the country that have been damaged by wildfires. 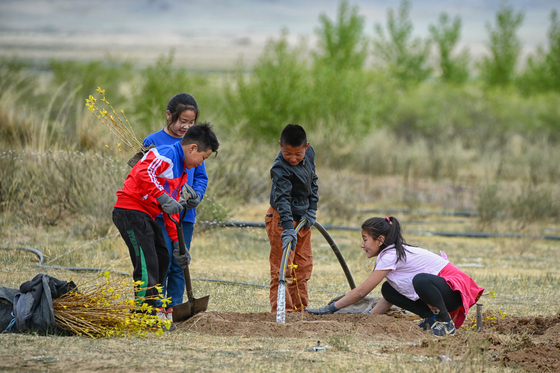 A group of children in Mongolia take part in planting trees in 2017 after a session with Korean experts. [KOREA FOREST SERVICE]

Sounds like Korea has been working with a number of developing countries on forestation through various international platforms. Is there currently an overarching global mechanism for developing and developed nations to partner on forestry?

There is a UN program called REDD plus, which stands for “Reducing Emissions from Deforestation and forest Degradation and the role of conservation, sustainable management of forests and enhancement of forest carbon stocks in developing countries.” This mechanism was born at the UN Climate Change Conference of the Parties in Montreal in 2005.


How is Korea contributing to REDD plus programs?

The 650,000 metric tons of carbon emissions reduced in Cambodia through our REDD plus project has been transformed into a credit that we can then trade.

We’ve had REDD plus projects in Indonesia’s Kampar regency from 2013 to 2016, and have ongoing projects in Myanmar’s Pegu Range and Laos’ Champasak Province through 2022. It is our intention to expand our REDD plus projects to areas in the Amazonian regions, central Americas, as well as the areas around the Congo Basin. 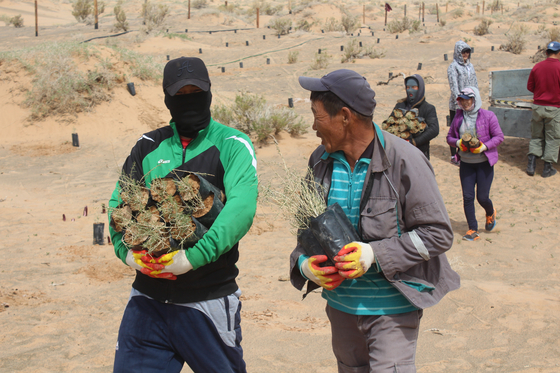 Locals in Mongolia are handed out seedlings in a project with Korea in 2017. [KOREA FOREST SERVICE]


Will the REDD plus credits be able to be factored into the NDC target achievement?

Reductions of greenhouse gas emissions through REDD plus programs are acknowledged by the UN Framework Convention on Climate Change. But the carbon reduction credits that Korea has won through the program in Cambodia does not count as part of its NDC target achievement because the reduction took place before Korea presented its NDC target in 2020.

But, in the upcoming 26th UN Climate Change Conference of the Parties (COP26) meeting in Glasgow, Korea will dispatch a team to discuss whether Korea’s future participation of REDD plus programs and subsequent carbon emissions reductions can be counted toward Korea’s NDC target achievements. But this will be possible only when parties to the conference agree to create such a mechanism.

The world is battling climate change via reducing our carbon footprint, and reforestation is part of that battle. Trees absorb carbon as they grow, and according to some local research, the rate of carbon absorption is the highest when trees are around 20 to 30 years old. The long-lasting impact of forestation can be a sustainable and effective response to climate change.

And part of the reason why we have been focusing on partnering with developing countries on forestation is because there have been studies, such as one by the UN in 2019, that point to forestation as being one of the most effective measures to fight climate change, and we believe that as a country that has been trying reforestation for years, we all have something to gain by sharing our experiences and helping more countries get on the same page and up to speed when it comes to effective forestation and proper forest management to reduce carbon emissions.

But that doesn’t mean that all our partners on forestry work are developing nations. At the United Nations Forum on Forestry in April, Korea shared its IT-based wildfire response system with Australia. We talked about our experiences in using big data on wildfires in Korea to be able to predict each season where wildfires would be prone to take place and using drones to monitor forests and fight wildfires. 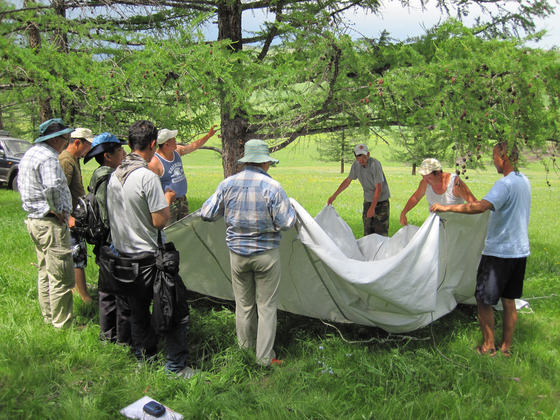 A community in Mongolia being educated about a pest control technique in 2017. [KOREA FOREST SERVICE]


North Korea has been reported to have serious levels of ongoing deforestation throughout the country. The South Korean government in a meeting of parties to the United Nations Convention to Combat Desertification in 2019 proposed a program called Peace Forest Initiative, a forestation partnership between two neighboring nations. Does the Korean Peninsula have plans to take part in this initiative?

The initiative can be launched when two neighboring nations agree to take part in it together. For the initiative to apply to the Korean Peninsula, the status of inter-Korean relations will have to be taken into consideration. But it is the hope of the Korea Forest Service that with the right conditions, the two Koreas can indeed work together to reforest North Korea’s land and to partner for forestation in other parts of East Asia.

For now, the Korea Forest Service, in cooperation with the Unification Ministry, is examining areas within the demilitarized zone to collect information on the plants and trees. We are also discussing how we might be able to turn some preserved areas of the zone into an area that both nations can enjoy peacefully.

[INTERVIEW] Forest minister pledges a renaissance of trees in Korea