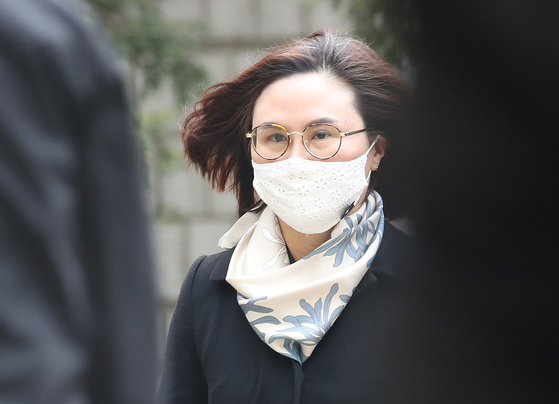 
Chung Kyung-sim, wife of scandal-plagued former Justice Minister Cho Kuk, lost her appeal and was sentenced to four years in prison on Wednesday for carrying out a series of academic frauds to help their daughter get into college and graduate schools.

The Seoul High Court on Wednesday upheld the Seoul District Court’s ruling that she had fabricated documents and obstructed the admission process of Korea University and two medical schools. The high court, however, acquitted her of some of financial fraud charges unrelated to the admission scandal.

In addition to the four-year jail term, the court ordered Chung to pay a 50-million-won ($43,000) fine and a separate 10.61 million won in unlawful gains for her financial crimes. This fine was largely reduced from the 500 million won levied in the initial ruling, because of her partial acquittal.

The high court upheld all of Chung’s seven convictions related to the admission scandal.

“Chung has obstructed the admission process of education institutions and seriously ruined society’s trust in the fairness of the admissions system,” Judge Eom Sang-pil of the Seoul High Court said.

“Throughout the trial, the accused blamed the nature of the admissions system in order to dilute the seriousness of her crime” Eom continued. “She also blamed other people who offered fake documents with an innocent intention to help her family.”

Chung, a 59-year-old English-language professor at Dongyang University, was jailed on Dec. 23, 2020, after the Seoul Central District Court ordered immediate detention after sentencing. She has been remanded and underwent the appeals trial in detention.

Chung's husband Cho, a core member of President Moon Jae-in’s inner circle, served only 35 days as justice minister before resigning from the post in October 2019 after scandalous revelations surrounding his family. 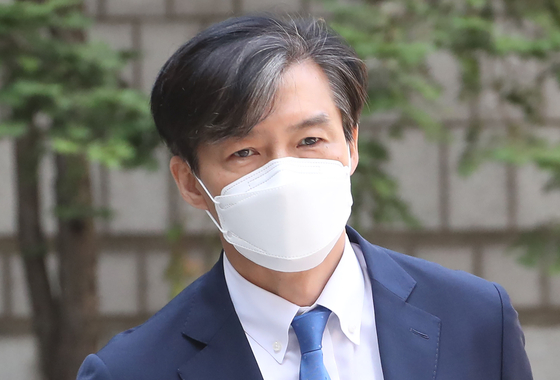 
He was investigated and indicted on criminal charges associated with his children’s multiple academic frauds and receiving bribes. The case is being tried at the Seoul Central District Court.

Chung was indicted in 2019 on three main allegations. She was accused of forging documents to help her daughter get accepted into Korea University and two medical schools; making illegal investments using a private equity fund; and destroying evidence.

She was indicted on 15 counts and the Seoul Central District Court convicted her on 11 of the 15 charges in December last year. She appealed the ruling, and the high court spent eight months considering her case.

Just like the district court, Judge Eom of the high court found Chung guilty of all seven charges associated with her daughter’s admission frauds.

“We are frustrated that the court convicted her of obstruction of admission based on documents submitted to the schools 10 years ago,” a lawyer of Chung said. “We wonder how many people are free from the current interpretation of the past practice.”

Cho posted a statement on his Facebook about his wife losing the appeal. “As a family member, it is very painful,” Cho wrote, adding that Chung’s case will be appealed to the Supreme Court.

Korea University, where the couple’s daughter Cho Min graduated from, said Wednesday that it will review the ruling of the high court and take any necessary action. Ever since the academic fraud scandal emerged, Korea University students have demanded the school cancel her admission, and the university said in June that it will act after the high court rules on the case.

If Cho Min’s Korea University admission is canceled, her admission to Pusan National University’s medical school will automatically be void, because an undergraduate degree is a prerequisite to enter medical school. In this case, Cho’s passing of this year’s Korean Medical Licensing Examination will also be null, and her education status will be reverted to that of a high school graduate.

The high court also upheld the district court’s acquittal of Chung’s embezzlement charge from a private equity fund that she had invested in from 2015 till 2017.

The high court’s ruling, however, was different from the district court’s conviction that she had used insider information to make an investment and profit from it.

Chung was indicted for using insider information and purchasing 120,000 shares of a technology company under her family’s name in January 2018. While the district court found her partially guilty of the charge, the high court acquitted her.

The acquittal largely reduced her fine for the financial crime.

The high court, however, reversed the district court’s acquittal that she had ordered her asset manager to conceal the hard disk of her home computer and another computer from her university office.